Simon Spurrier’s Lord of the Night is a Black Library novel in which one of the protagonists is a Chaos Space Marine – something of a rarity before the launch of their Horus Heresy series. Specifically, the two viewpoint characters in the novel are Zso Sahaal, a Commander of the Night Lords Legion of Chaos Space Marines, and Interrogator Mita Ashyn, a member of the Imperial Inquisition determined to take him down. 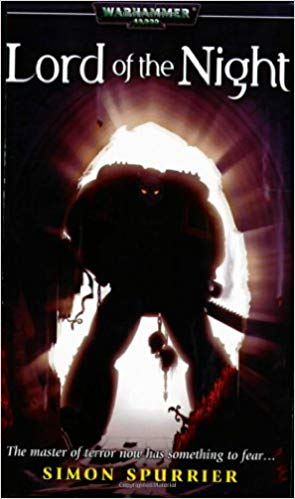 Zso Sahaal is no ordinary Space Marine turned traitor against the Imperium and corrupted by the forces of Chaos, mind. The Night Lords are pretty idiosyncratic as a Legion; their combat capabilities are based around the guerrilla warfare and terror tactics formulated by their Primarch, Konrad Curze, and before they defected during the Horus Heresy they used these capabilities to do the Emperor’s dirty work. What’s more, they betrayed the Imperium for their own reasons and regard the forces of Chaos as allies rather than masters – there are even a few of them, like Zso, who have resisted the corruption of Chaos to retain the wholeness of their body and mind.