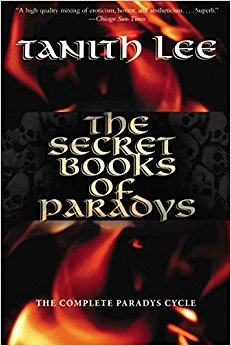 Tanith Lee’s epic bibliography is a daunting prospect for anyone daring to attempt explore it, but at least some effort here and there has gone into producing omnibus editions of significant works by her. Overlook Duckworth have produced The Secret Books of Paradys, a fat compilation of the series of books Lee penned set in the titular city. Paradys (or Par Dis, or Paradis, or Paradise – its name varies between tales and sometimes within them) is a sort of gothic funhouse mirror take on Paris, and Lee’s Paradys tomes tend to be divided into notional colour-coded books which each offer a different story of the city. Originally published in the late 1980s and early 1990s, these are stories of horror, fantasy, and eroticism unfolding in a setting close enough to the real world to feel historical but counterfactual enough to feel fantastic. That all sounds like great fun in principle, but how’s the execution? 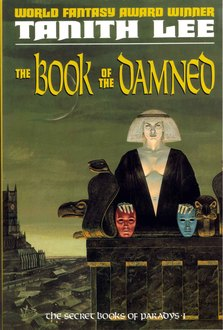 The Book of the Damned

This comprises the first three colour books of Paradys – each a separate novella with some themes in common with the others. Our introduction to Paradys comes in the novella Stained With Crimson, constituting Le Livre Cramoisi, narrated by Andre St Jean, a struggling writer who maintains a foothold in high society thanks to his friend and occasional lover Philippe. One day, returning home from a seance at Philippe’s mansion, Andre is accosted by a tattered man in the street, who gives him a ring with a magnificent red gemstone set in it, carved with the likeness of a scarab. Before Andre can enquire too deeply about it, the man flees, pursued by a horseback rider chasing him with dogs.

Philippe believes the ring belongs to society hostess Antonina Scarabin, and drags Andre along to one of her salons, but she denies that it has anything to do with her. However, the fateful meeting has now happened: Andre has become passionately obsessed with Scarabin, whose motivations and desires are maddeningly obscure. Over the rest of the novella we follow a strange trail of bloody killings, morbid internments, and shifts in identity – including Andre becoming Anna and Antonia becoming Anthony through some curious deaths and rebirths – and strange hints of vampirism creep about the edges, but the full implications of what we are reading are hard to grasp.