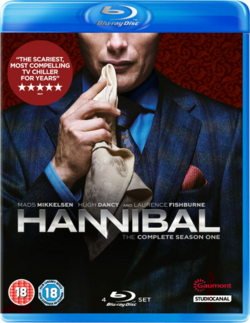 Will Graham (Hugh Dancy) is an expert in psychological profiling with a great record in serial killer investigations. This is largely because he has a unique gift for analysing cases by putting himself in the shoes of the killer themselves, because apparently we exist in a world where the idea of constructing a psychological profile and imagining “if I were this sort of person, what would I do and what would my motives be?” is somehow unusual rather than usual routine. This process is startlingly vivid – why, it’s a roleplaying exercise that puts Mazes & Monsters to shame! – and as a result it causes a great psychological strain on Graham, who has tried to get out of the field by settling into a career teaching at the FBI Academy in Quantico, Virginia.

However, Special Agent Jack Crawford (Laurence Fishburne), head of the Behavioural Science unit, wants Will active as a field investigator, and draws him into the investigation of a killer who becomes known to the media as the Minnesota Shrike. Will seems to be making progress, but is also becoming erratic, so Crawford decides to get him some support – a little aid from an expert psychiatrist who can both give Will the counselling and personal help he needs to digest all this grimness he’s exposed to, and who might also be able to pitch in with his own observations on the investigations from time to time. The man he chooses for the job is Hannibal Lecter (Mads Mikkelsen)…