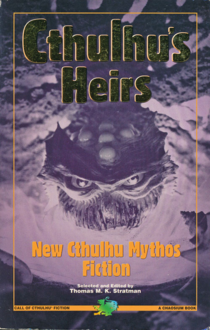 Though Robert M. Price was line editor for Chaosium’s Cthulhu Mythos fiction line for most of its early years, he wasn’t the only anthologist allowed to put out work through that avenue. Thomas M.K Stratman’s Cthulhu’s Heirs, from 1994, was one of the first collections in the series. Though it does include a few reprints, most of the material it contains is original to it, the intention of the anthology being to present a new cohort of Lovecraftian writers for a new millennium.

That said, it has certain issues – enough that it’s not wholly surprising that Stratman hasn’t produced any further anthologies since. For one thing, in his introduction he shows a startling ignorance of his subject matter; he cites Zealia Bishop as a Lovecraftian writer, but shows no apparent awareness that whilst that statement is technically true, it’s also asinine. Yes, Lovecraftian stories did appear credited to Bishop – The Curse of Yig and The Mound. They’re Lovecraftian because they were entirely written by Lovecraft himself; Zealia Bishop was a revision client of his and so far as can be made out, Bishop actually contributed nothing to the stories in question beyond, at most, a vivid central image around which she asked Lovecraft to construct a story.

Stratman’s introduction goes from being just a bit clueless to being outright astonishing when he openly admits admits that contributors to the anthology were subjected to numerous delays and paid only minimum rates. Maybe this was his way of protesting against the circumstances he was working under, but it honestly doesn’t read like that. I’m not sure how it was supposed to read, but in context it feels like Stratman is trying to thank his writers for being patient with him; however, openly declaring “I run late and I don’t pay well” is a terrible idea for an editor. It’s tantamount to an overt declaration that he’s a shitty editor to work for and you’d be better of submitting your stories to anyone else with more credibility and standing than him, because if you give him your story you won’t get so much money for it and it might take ages for it to actually get published.