I am a sucker for cult confessionals. Give me a first-hand account of someone joining an obscure sect, finding out it’s not all it’s cracked up to be, and leaving – perhaps suffering horribly in the meantime – and I’m there. I think a fair number of people are fascinated by oddball religions – I’m constantly surprised by how many of my acquaintances have read and enjoyed Sam Jordison’s The Joy of Sects – but by their nature cults are insular beasts, with obscure customs and tangled, often complex teachings. A view from the inside is often a great way to understand them.

There’s a problem, though; by their nature, cult confessionals are written by people who have dropped out of these groups, and therefore have an axe to grind. Objectivity is neglected in favour of airing the writer’s grievances. It’s never the author’s fault for getting caught up in a group, even when there are bright flashing warning signs from the very start; it’s always the fault of the group’s malevolent leader, whose powers of mind control are irresistible. There are some exceptions – Tim Guest’s My Life In Orange is an account of his childhood as the son of a follower of Bhagwan Shree Rajneesh, and his experiences growing up in the group’s communes. While he does feel some resentment for the cult, he does manage some degree of objectivity; he blames Bhagwan’s power-hungry assistant, Ma Anand Sheela, for the cult’s decline into authoritarianism and madness in the latter days of the American commune, rather than the leader himself, and he doesn’t let his mother off the hook either, describing how her burning need for spiritual fulfilment led her to neglect her duties as a parent. 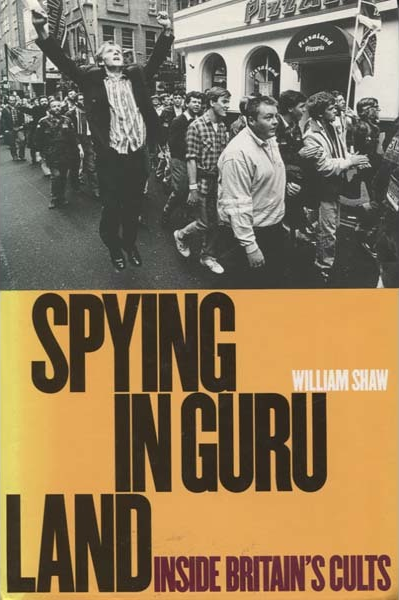 Another exception is Spying in Guru Land by William Shaw. Shaw first became interested in cults when he was researching a book on New Age travellers, and stumbled across the tale of Holy John, the guru of a short-lived sect which lived in Cornwall awaiting the return of Lyonesse, King Arthur, and the Lady of the Lake. He decided to research them by infiltrating them and learning their secrets. The ethics of faking religious faith are debatable but the result is a valiant attempt at an objective look at the subject.