The Story So Far

Arthur read the first volume of The Walking Dead and was so excited by it that he bought the next couple of books. Will his foolhardy early endorsement of the series backfire on him? Read on and find out!

Volume 2: Miles Behind Us 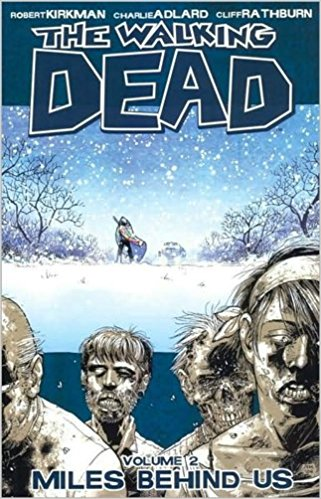 Picking up the story in the aftermath of the shocking conclusion of the first volume, Miles Behind Us is the debut of Charles Adlard as the lead artist on The Walking Dead, following the departure of Tony Moore, and I have to say that Charles does not quite fill Moore’s shoes. His artistic style is extremely generic – it has less personality than Moore’s, and I’ve got to say it’s simply worse on a technical level: Adlard can’t quite seem to keep the facial proportions of the characters consistent, sometimes making one character look like two different people on the same page. There were points, in fact, where I had to go back to reread part of the comic because I realised that I’d mistaken one character for a completely different character.

The writing has also become less interesting, Kirkman occasionally throwing great walls of text at the reader, to the point where it makes me wonder whether he doesn’t entirely trust his new artist’s ability to get the point across; people talk about their feelings a lot – more even than in the first comic – which is probably fair enough since Adlard’s ham-fisted art can’t quite get the same range of emotional expression across as Moore’s.