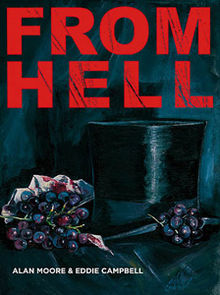 It’s the late 1880s, and royal party boy Prince Albert “Eddy” Victor – grandson of Queen Victoria and second in line to the throne – has been having all manner of fun. Encountering Annie Clark, a Catholic woman who works behind the till at a sweet shop just across the road from Eddy’s favourite rent boy brothel, he begins an affair with her which culminates in an ill-advised secret marriage and the birth of a child – one who, strictly speaking, would then be in line for the throne.

Queen Victoria will not stand for this, and she uses all the covert influence available to her to make sure that Eddy and Annie are forcibly separated. Among the resources available to her is the power structure of British Freemasonry. With members riddled throughout the British aristocracy and respectable professions, the Masons were a microcosm of the establishment of the time, and a large cross-section of Victoria’s male family members were Masons. Between that and a perennial desire for Royal patronage, it was no surprise that the Brotherhood was willing to do favours for Victoria. In this case, this included enlisting Dr William Henry Gull – Freemason, physician, and mystic – to the task of performing an operation on Annie to profoundly damage her mental capabilities. Even if she could get someone to listen to her story and she were able to coherently tell it through the cognitive fog imposed on her, nobody would give it any credence.

However, Annie’s fate wasn’t unknown to all. Marie Kelly, an East End prostitute and friend of Annie’s, is aware of what happened, and also knows that painter Walter Sickert – who had accompanied Eddy on his visits to the seedier side of town – is aware of what’s happened. When she and a group of her fellow prostitutes are shaken down for protection money they don’t have by a local gang, they hit on a plan of blackmailing Sickert for cash. Alas, they get greedy, ask for more money than Sickert has available, and when he turns to his Royal connections for help word of the matter gets back to Victoria, who dispatches Gull to silence the women, permanent-style.

Alas, Gull’s work is no clean, surgical strike this time around. Having suffered a stroke, Gull has become prone to mystic visions and occult obsessions, and he regards the work to be done in averting Royal embarrassment as a mere pretext for his true goal. The 20th Century is looming, and Gull believes that by conducting the murders in a particular manner and pattern, aligned with the occult geometry of London, he can turn them into a ritual act which will shape the very nature of the coming century. His intention is to make it safe from the rising tide of feminist and other progressive challenges to the status quo, winning the day for what he sees as the inherently masculine force of Apollonian rationality. The actual outcome is, well, the history we got…

END_OF_DOCUMENT_TOKEN_TO_BE_REPLACED 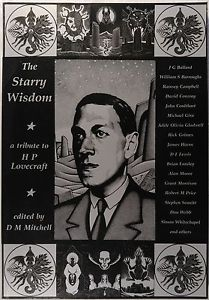 So, a while back it was suggested that I should cover Alan Moore’s various Cthulhu Mythos works, Moore having gotten deep into the Lovecraft tribute business right about the time I was doing my epic Lovecraft review and its various followups. To tell that story, though, I have to go back a little and tell the story of The Starry Wisdom, a curious little volume issued by Creation Books in 1994. Creation Books, back in the day, was a publisher that was vaguely associated with Creation Records and specialising in cult and underground books; edited by D.M. Mitchell, The Starry Wisdom has gained a reputation as perhaps the weirdest and most out-there Cthulhu Mythos anthology you can find, incorporating as it does texts from other authors (such as William Burroughs or J.G. Ballard) who, whilst not writing directly in the Lovecraft tradition, seem to conceptually butt up against it here and there, as well as contributions from the world of comics (both in terms of comics authors turning their hands to prose and some of the stories being presented in graphic novel format) and industrial music (Michael Gira of Swans has got a rant in here, for instance).

What it does, in short, is mash up extreme stories by traditional Mythos authors, Mythos-adjacent stories from extreme authors, and generally go broad as broad as you can in terms of what can constitute a Cthulhu Mythos story without losing sight of Lovecraftian cosmic horror altogether, and by and large it’s a great little ride. Heck, they’re even able to get a half-decent story out of Robert M. Price: his contribution, A Thousand Young, is an intensely sexualised story about a Shub-Niggurath cult posing as a society of modern-day Sadean libertines. The cod-Lovecraftian prose that Price seems to like to write in, when applied to this subject matter, actually seems weirdly apt for its confessional format. Here, supernatural horror is largely incidental to the horror of what narrator does in pursuit of his purported spiritual goals – Price once again scraping his way to a good story by engaging with his theological and philosophical interests in an imaginative manner.