In the first article in my LucasArts retrospective I’ve covered the early SCUMM engine-powered adventure games of LucasArts, prior to The Secret of Monkey Island; in the second, I covered the incredible run of adventures they put out from the first Monkey Island to Sam and Max Hit the Road. Over the time period covered from those articles, from 1987 to 1993, LucasArts put out at least one adventure game per year, occasionally two. It was a fine time to be an adventure fan.

For the last decade during which adventure game development took place at LucasArts, from 1994 to the cancellation of Sam and Max: Freelance Police in 2004, the release schedule would be much more sporadic – in fact, they’d cancel at least as many adventure game projects as actually came to fruition. In 1994 no adventures made it out.

Part of this was down to the canning of not one but two attempts to make sequels to Indiana Jones and the Fate of Atlantis which had been under development in 1994-1995; it had become apparent that the European market, including Germany, was a major driver of sales for LucasArts adventures, to the point where that market was essentially the reason adventures were being greenlit in the first place. This makes it awkward to base adventures around a franchise where the bad guys prominently wear swastikas because they are actual Nazis.

However, the gap was not just down to this. Two projects which released in 1995 were the product of unusually long development cycles. One of these was a technologically ambitious affair whose long development cycle was inevitable in light of what they were trying to achieve; the other was a game that had spent over half a decade in various stages of development hell… 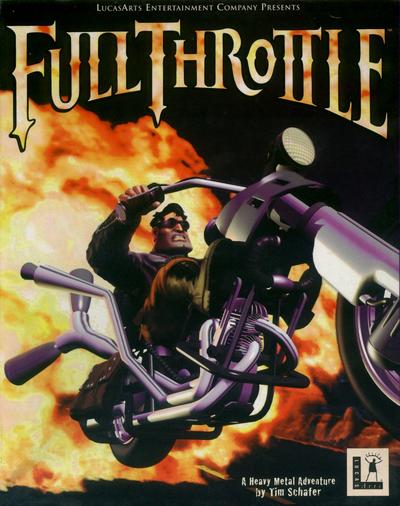 Ben Throttle is the leader of the Polecats – an outlaw motorcycle gang cruising around a dilapidated American West in the not-too-distant future. The world’s moved on from folk like the Polecats; the regions of America they haunt seem to be rather tumbledown places, a post-apocalyptic world arising not from a flashy apocalypse of warfare or disaster but a slow slide into total neglect. The interests of megacorporations lie elsewhere, and even their motorcycles are relics of a bygone age – most vehicles now are based on antigravity hover technology.

One company, however, keeps the traditional American two-wheeled motorcycle alive – Corley Motors. Its founder, Malcolm Corley, is an old biker himself and is more than able to rub shoulders with his customer base, despite the business suit. His vice president, Adrian Ripburger, is a very different prospect – and has a vision for the company’s future that doesn’t include Corley or traditional bikes.

The Polecats are drawn into this plan when they are cajoled – through a bit of subterfuge that includes getting Ben out of the way – into acting as Corley’s outriders as he heads to the shareholders meeting. Ripburger exploits the opportunity to kill Corley and blame the Polecats for it – but Ben witnesses the crime, and is tasked with finding Corley’s true heir with the old man’s dying breath. It’ll take all of Ben’s brains and brawn – and all the horsepower his bike can give him – to get out of this scrape.

END_OF_DOCUMENT_TOKEN_TO_BE_REPLACED

Otto Preminger was one of the film noir directors who really pushed the envelope in terms of the sort of content they would include in their movies, offering an important alternative to the bowlderised, homogenised, unthreatening fare demanded by the MPAA Production Code’s de facto censorship. In recognition of his accomplishments, the BFI have put out a slim blu-ray set of some of his greatest works. Two of these are noir classics; one is a weird little misstep held together only by the strength of one of the actors’ performances.

Eric Stanton (played by Hollywood legend and regular Preminger collaborator Dana Andrews) is an utter sleazeball – a short con artist who we first meet as he makes an unplanned stop on his trip from LA to San Francisco at the small seaside town of Walton. There he spots the work of two con artists of a different stripe – Professor Madley (John Carradine), a spiritualist medium and charlatan, and his assistant – and Stanton manages to use his smooth-talking ways to turn around their flagging ticket sales and ensure that the local auditorium is packed for their show. In the meantime, he’s started to fall for Stella (Linda Darnell), a local waitress who it’s heavily implied is working on the side as a prostitute.

Having heard tell during the seance of local heiress Clara Mills (Anne Revere) holding onto some $12,000 in bearer bonds, and infatuated with Stella – in a nasty, stalkery, grabby, boundary-violating sort of way (which to my eye the film acknowledges as being not cool) – Stanton hits on a plan: charm Clara’s sister June (Alice Faye), get close to her, grab those bonds, and skip town with Stella. Stella doesn’t quite agree to go along with this so much as she fails to overtly and unambiguously reject it; she’s more annoyed with the way Stanton insists on her not doing any sex work whilst he’s working the con – or the way he marries June as part of the scam.

Stanton and Stella argue – with Carol overhearing – and then Stella shows up dead. Stanton’s a natural fit for the crime, and local snoop Mark Judd (Charles Bickford), a retired New York cop, knows it all too well. But if Stanton wasn’t responsible, who is? And can he persuade anyone of his innocence when he’s been such a colossal arse to everyone?