Giallo is an Italian genre of cinema which can best be described as an arthouse precursor to the good old-fashioned slasher movie, combining a reverence for Agatha Christie and Alfred Hitchcock with brazenly violent and sexual content. To a large extent The Bloodstained Shadow has Antonio Bido working as an acolyte of Dario Argento’s school of giallo, as perfected on Argento’s run from The Bird With the Crystal Plumage to Deep Red. Combine the classic hooded-and-black-gloved killer that’s been a motif of giallo ever since Mario Bava’s genre-defining Blood and Black Lace, a string of murders beginning with the slaying of a medium, a killer motivated by the suppression of information about a long-forgotten crime, a painting that proves to be a crucial clue, a prog rock synthesiser soundtrack, a fakeout ending where the protagonists think they’ve caught the killer when in fact at most they’ve only dispatched an accomplice, a decades-old killing shown at the very beginning which turns out to be the catalyst for all the action, a creepy toy motif, and a recurring emphasis on the artistic, the aesthetic, and the erotic, and you end up with a film in peril of turning into Argento-by-numbers. 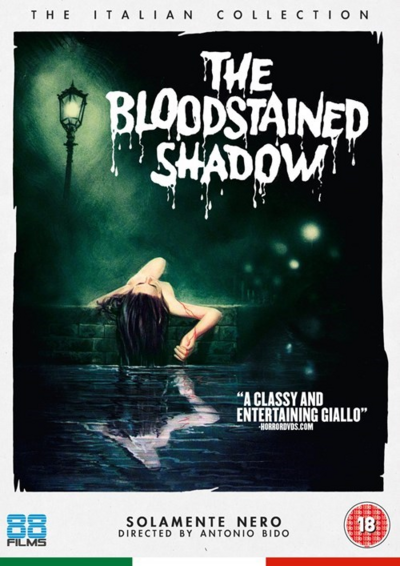 Bido almost saves himself; certainly, as far as Argento imitators go he pulls off a really masterful job, producing a piece which for the most part could sneak its way into the grandmaster’s own canon through the back door had it a mind to – were it not for a bungled conclusion that makes the whole thing unravel.