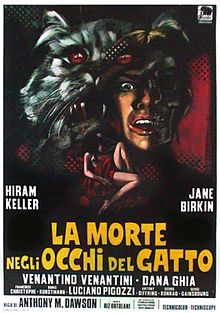 The MacGrieffs are an aristocratic Scottish family. (They’re the most Italian-seeming Scots ever, but never mind.) They rattle about in their ancestral home, Dragonstone Castle which sits on an island their family has ruled over since time immemorial, and is riddled with secret passages so that the staunchly Catholic family could hide priests during times of Protestant-led persecution. (Never mind that the architectural style of the exterior shots is distinctly Mediterranean.)

There are various significant residents and guest in the house. Most important of all is the castle cat, the most big-faced floof-furred whisper-socked fluffkin you ever did see. There’s also Lady Mary MacGrieff (Françoise Christophe) the family matriarch and her sister, Lady Alicia (Dana Ghia), who have ongoing tensions concerning money. (Mary is broke, Alicia is loaded, Alicia won’t give Mary the money she needs to pay the bills and keep hold of the castle.) You have Lady Mary’s son, Lord James (Hiram Keller), who looks like he stepped off the front cover of a romance novel and who is said to have killed his baby sister when he was a boy; everyone tells him he’s mad, so he plays up to it, spending most of his time working on artwork in various forms with only his pet gorilla for company.

Then you have Dr. Franz (Anton Diffring), who’s been placed in charge of James’ treatment, the mysterious Suzanne (Doris Kunstmann) who claims to be James’ “French tutor”, various priests, and the protagonist of our story – Corringa (Jane Birkin), Alicia’s daughter, who’s just been expelled from the convent school she was sent to but hasn’t gotten around to telling her mum yet. Corringa had better tread carefully, though – tensions are high with Mary’s money worries, Dr. Franz’ frustrations with his treatment of James and all the ways his unorthodox approach is going wrong, and the persistent rumour that any MacGrieff who kills one of their own will rise from the grave as a vampire. What of the bad luck from Corringa’s accidental burning of her copy of the Bible? And then there’s the slayings by the mysterious killer who strikes in the dead of night, when the only witness is the gingery-wingery growly-meowed Garfieldian whisker-colonel… Will Corringa get to the bottom of the mystery, or be yet one more of the Seven Deaths In the Cat’s Eye?