When I went to see Underworld: Awakening with Dan and Kyra I made sure to manage my expectations accordingly. All the Underworld films are incredibly stupid, but the previous one was stupid in a way which threatened to cease being fun, degenerating into a dreary exercise of sleepwalking through backplot which everyone even mildly interested in the film already knew back to front. The problem they had, of course, was that with the first two movies they more or less ran out of plot, so a continuation of the series would need to find some way to disrupt the status quo reached by the end of Underworld: Evolution. 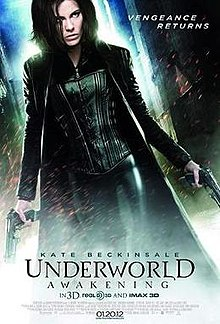 This is adequately achieved in the first ten minutes of Awakening, in which we get a brief action-packed rundown of the first two films, then a tense action sequence to establish the new reality our protagonists are dealing with and depict the events which took them out of action, and then follows that up immediately with yet another action sequence in which our hero escapes captivity to find her world has changed utterly. If you’re thinking “wow, that’s a lot of action sequences”, you’d be correct: of all four Underworld movies, this one has by far the greatest emphasis on action and the least talky bits of any of them.