As my backlog clearance continues, I am resorting to this: giving you a clutch of reviews of movies from the 1980s held together by the tenuous common theme of “all these movies represent a particular type of person you would have met in the 1980s”. Here goes. 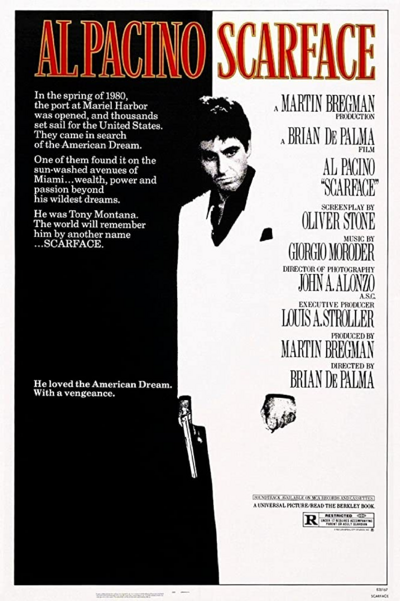 The movie opens against the backdrop of the Mariel boatlift – Fidel Castro’s surprise decision to allow thousands of emigrants to leave Cuba – resulting in a refugee crisis in Florida. The movie plays on the fact that Castro took the opportunity to send numerous prisoners and mental hospital patients to Florida, divesting the Cuban government of the cost of handling them, by including among the emigrants Tony Montana (Al Pacino), along with a number of his buddies – who, by the evidence of their prison tattoos, are apparently hardened criminals.

Montana and company end up in a makeshift refugee detention centre underneath a motorway flyover. Through the fence, they receive an offer suited to their skills: Frank Lopez (Robert Loggia), a well-connected Cuban-American drug baron, will pull the right strings to allow them to get released and get their green cards in return for assassinating Emilia Rebenga (Roberto Contreras), who’d tortured Frank’s brother to death back in Cuba. This is accomplished in chilling fashion during a riot in the detention centre.

It’s not directly stated whether or not Tony engineered the riot, but it’d be entirely in keeping with his tendency for massive overescalation of violence, which we see plenty of as the movie progresses. As Tony moves his way up the ranks in Frank’s empire, eventually ousting him, a whirlwind of cocaine addiction, Tony’s infatuations with Frank’s ex-girlfriend Elvira Hancock (Michelle Pfeiffer) and his own sister Gina Montana (Mary Elizabeth Mastrantonio), and his entanglements with even more ruthless figures like cocaine manufacturer Alejandro Sosa (Paul Shenar) all contribute to his downfall, which is ultimately spurred by his machismo-driven refusal to compromise with anyone or to back down in any situation.

END_OF_DOCUMENT_TOKEN_TO_BE_REPLACED 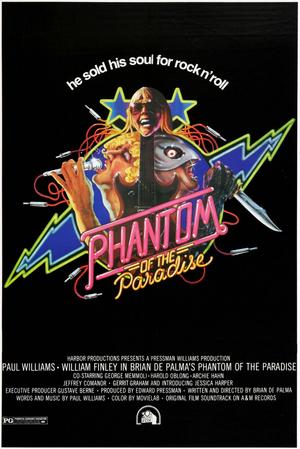 The mysterious Mr. Swan (Paul Williams) is a legendary record executive and producer – Mephistophelian in his bearing, Svengali-esque in his powers of persuasion, and Phil Spector-esque in pretty much every other respect. His current hit group, the Juicy Fruits, have spearheaded a nostalgia wave to the top of the charts, and his Death Records label dominates the industry. Now he wants to open the Paradise – his very own deluxe concert hall – and he wants the perfect music to open it with.

Enter humble Winslow Leach (William Finley), a skilled pianist and songwriter who’s written an epic rock opera based on Faust. Overhearing Leach performing some of his material, Swan sends his thuggish agent Philbin (George Memmoli) to acquire it – having done so, Swan and Philbin cut Leach out of the process entirely. As Leach tries harder and harder to get them to listen to him, Swan’s empire wrongs him more and more – first they throw him out, then they beat him up, then they have him arrested on trumped-up drugs charges and sent to Sing Sing, where the governor arbitrarily has his teeth removed and replaced with steel teeth. Flying into a rage when he hears a news report that Swan intends to have the Juicy Fruits perform his material, Leach escapes and goes on a rampage against Swan’s business interests, during which he incurs further horrible injuries, loses his voice entirely, and is thought to have died.

Under the circumstances, there’s only one thing to reasonably do: sneak into the Paradise, cobble together a spooky costume from the props cupboard, and do the whole Phantom of the Opera thing to terrorise Swan. Trouble is, Swan is difficult to scare – and very persuasive. On encountering the transformed Leach he offers to put on Faust the way Leach wants it, once Leach has rewritten it to suit a new vocalist. Having fallen in love with showbiz hopeful Phoenix (Jessica Harper in her first movie appearance), Leach agrees and signs a contract – in blood, naturally – on the condition that Phoenix be the lead singer.

Swan, naturally, reneges on the deal – leading to an escalation of the conflict between them that reveals supernatural twists to Swan’s history and culminating in a chaotic final sequence which is a triumph of carefully choreographed chaos. Characters die and hearts are broken – but the party’s so good and the music’s so hot that barely anyone notices. All this is naturally set to a great soundtrack – penned by Paul Williams himself – concluding with perhaps the best song of the lot over the credits, a catchy Elton John-esque number about how the fallen characters’ lives were totally meaningless and they’re better off dead.