It’s the 1980s, and horror franchises are all the rage, with series like Halloween and Nightmare On Elm Street churning out unfathomable numbers of sequels. Imagine being Sean S. Cunningham, the producer and director of the original Friday the 13th, only to lose the rights to the franchise when you walked away due to your mixed feelings about it, and seeing that franchise rack up sequel after sequel. (As it turns out you’ll eventually get to work with the property again in 1993 for Jason Goes to Hell: the Final Friday and its followups, but you don’t know that yet.) Suppose as a producer you happened to have a portfolio of horror projects which didn’t really have much to do with each other beyond the shared genre. Wouldn’t the temptation to present them all as part of the same series be overwhelming?

Apparently it was, because that’s how we got the House sequence, a disreputable set of films notable mainly for the badass severed hand motif on the movie posters. Arrow Video have actually stooped to putting them out on Blu-Ray. Need they have bothered? Let’s find out. 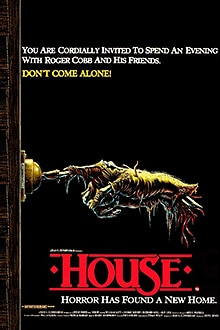 Roger Cobb (William Katt) is a Vietnam veteran turned blockbuster horror author whose personal history is intertwined with the house of his Aunt Elizabeth (Susan French). As well as being his childhood home after he was orphaned at a young age, it’s the place where his own son Jimmy (Erik and Mark Silver) disappeared under mysterious circumstances whilst visiting with Roger and then-wife Sandy Sinclair (Kay Lenz). So, with Roger and Sandy divorced, Jimmy still not found by the authorities, and both Roger’s agent and his fans kind of hoping he’ll give up on this idea of writing a memoir of his Vietnam years to focus instead on turning out the sort of horror stories he’s made his name with, it’s no surprise that Roger’s in a bit of a slump. (The Vietnam book isn’t making much headway either.) Aunt Elizabeth hanging herself is yet another personal disaster.

With everything getting to him just a little, Cobb decides against selling Aunt Elizabeth’s house for the time being, deciding that spending a little while rattling around the big old house, sleep in his racing car bed, and stewing in his memories is exactly what he needs to get things back on track. (Cobb isn’t brilliant at self-care.) It isn’t long before Cobb starts discovering that Elizabeth’s claims that her house was haunted, and the surreal pictures of Hellish imagery she painted, had a bit more substance to them than he ever thought possible. As Cobb’s behaviour becomes stranger and stranger as a result of the weird manifestations he’s faced with, his jovial neighbour (and huge fan of his books) Harold Gordon (George Wendt) starts to worry about him – and soon both Roger and Harold are drawn into the chaos that lurks behind the closed doors of the house.