Marco (Jean-Louis Trintignant) is a big man in the chicken business. He and his wife Anna (Gina Lollobrigida) live in a home attached to a vast chicken factory complex, its processes almost entirely automated, and the poultry grower’s association that Marco is a part of is branching out into genetic engineering. Marco is tasked by the head of the association with devising a new publicity campaign to convince the public that chicken is tasty and delicious (seems like a bit of an easy sell, but OK), and in aid of this is teamed up with PR professional Mondaini (Jean Sobieski). 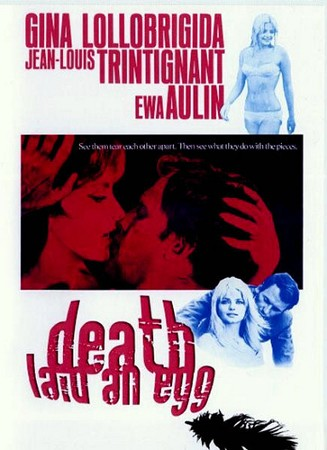 Mondaini is a stranger to Marco – but already knows a secret about him. For playing at peeping tom at a hotel, Mondaini witnessed a liaison between Marco and a prostitute – specifically, Marco apparently in the middle of murdering a prostitute, which is his hobby in his spare time. Meanwhile, back at home, tensions mount between Marco, Anna, and Gabrielle (Ewa Aulin), Anna’s cousin who has come to live with them and do some light secretarial work. Both Marco and Anna have some pretty intense feelings about Gabrielle – Anna encourages her to help her learn Marco’s secrets whilst gushing to Marco about how fantastically well-engineered Gabrielle’s body is; Marco, for his part, knows this all too well, since he and Gabrielle are having an affair.

Meanwhile, Mondaini increasingly overshadows Marco and Anna’s social life with strange games at a party they throw, the factory scientist perfects boneless chickens, and Luigi (Renato Romano), a mysterious amnesiac from Marco’s past, comes wandering in and out of the situation. Surely this must all come to a head somehow – but who’s in the driving seat and who’s going to end up with egg on their face?

Death Laid an Egg opens with a bizarre look into the lives of a cross-section of guests at motel and their various dubious business before we hone in on the specific characters of interest, floats between murderous intrigue and the intricacies of the chicken business, and confronts the viewer with motifs like a strange runic scarf in which Marco seems to perceive a threatening message, visions of a terrible car accident as Gabrielle drives Marco down a motorway, shots of couples engaging in everything from eagerly consenting sex to violent rape in a room of truth Mondaini establishes at Marco and Anna’s party.

In short, it’s what happens when the giallo style as initially formulated in the early 1960s goes stumbling into the psychedelic, experimental world of the late 1960s, complete with a tense free jazz soundtrack and a willingness to experiment to an extent which incorporates a near-hallucinatory element into the subgenre. There’s still plenty of hallmarks of the genre, mind – we see a lot of Gabrielle and Anna in various lingerie getups – but the whole concoction is so deliciously odd that nobody would call it a standard giallo.

Originally released in 1968 with some significant cuts, some of the lost material was restored in a so-called “giallo cut” in the 1970s; it’s only recently, thanks to the discovery of some lost prints, that Nucleus Films have been able to piece together a 104 minute director’s cut of the movie to represent Questi’s original vision for the movie.

Most of the restoration was done from the original negatives, but about 14 minutes or so of material had to be incorporated as inserts from an Italian print of the movie, for which no English soundtrack exists, so if you watch with the English soundtrack the movie reverts into Italian at points. This is an interesting exercise, however, because it makes it evident what parts were removed from early versions of the movie.

Most of these are fairly minor cuts which nonetheless give a bit more flesh to some of the subplots and odd little occurrences during the movie when restored, but others are more significant – in particular, almost all the material involving Luigi seems to only exist in the Italian version of the movie, and to be honest this seems the right call since he’s ultimately a bit of a red herring and his plotline doesn’t come to anything.

Indeed, the various tangled strings at the end don’t quite come together into a wholly satisfying conclusion, as is often the way with giallos which get too excited about weaving a web of intrigue to remember you’ve got to actually stop weaving and wrap up at some point. Part of the reason the ending drags is that a major plot twist is telegraphed too much in advance, so that by the time it’s revealed it’s not so much a sudden swerve as it is the narrative finally catching up to the viewer. Whilst this oddity might not be a keeper, it’s certainly worth a watch at least once.