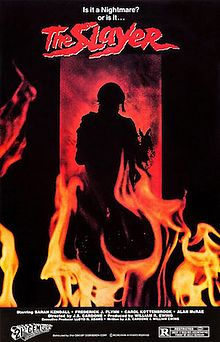 Kay Church (Sarah Kendall) is a painter who draws heavily on her dreams for inspiration (the end results being reminiscent of Magritte and his latter-day imitators), and who has a major show coming up. Kay’s mental health has often been rather fragile, and her husband David (Alan McRae) has become deeply worried about her well-being, so he’s arranged a special vacation in a friend’s holiday home on an otherwise-abandoned island just off the coast of Georgia (the US State, not the country). It’s just him, Kay, Kay’s brother Eric (Frederick Flynn) and Eric’s wife Brooke (Carol Kottenbrook)…

…Or at least, that’s how it’s supposed to be. There’s a storm coming in, and worse besides – for Kay’s recurring dream of being stalked by a hideous creature through an opulent house has left her feeling decidedly familiar with the island. For it’s the island she sees in her dreams, where the killings take place – and soon the killings start in real life. Has the monster that has haunted Kay’s dreams for as long as she can remember stepped out into the waking world?