Jacques Tourneur’s Night of the Demon – not to be confused with James Wasson’s ludicrously gory Bigfoot-themed film of the same name from 1980 – opens with paranormal debunker Professor Henry Harrington (Maurice Denham) arriving at Lufford Hall, stately home of cult leader Julian Karswell (Niall MacGinnis) – a man of Satanic reputation, at least one of whose followers has gone murderously insane. Harrington is there to beg for forgiveness for his attempts to expose Karswell’s claims of occult powers as fraudulent – and to get Karswell to call off the occult forces he has called up against Harrington using potent runic symbols. Karswell claims he’ll do all he can; apparently that doesn’t include stopping the manifestation of a giant, flaming beast from the depths of hell which ambushes Harrington outside his home. When his colleague, American psychologist John Holden (Dana Andrews), arrives in the country to attend a parapsychology convention he decides to take up Harrington’s investigation of Karswell, in tandem with Harrington’s niece Joanna (Peggy Cummins) and with the assistance of the other convention attendees. It’s not long before John’s scepticism is rattled by numerous strange phenomena – and when John receives his very own runic curse from Karswell, he finds that time is against him. 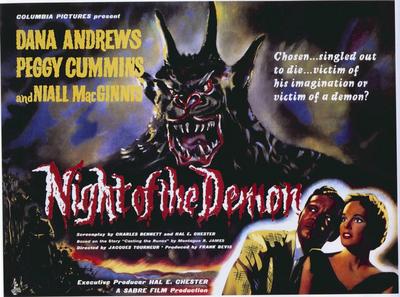 Appropriately for an adaptation of a story by M.R. James (Casting the Runes, adapted loosely by Charles Bennett and Hal E. Chester), Night of the Demon relies heavily on implication and is light on explicit shocks. The most glaring exception is the demon itself, seen at the beginning and end of the film, and allegedly added at producer Hal Chester’s insistence despite Tourneur’s reluctance to show it. As far as special effects go, it’s probably the movie’s most dated aspects; it’s a pretty good monster by 1950s standards, but only by 1950s standards. As far as Tourneur’s insistence that showing the demon turns Night of the Demon into a whole other film, I can see his point – its appearances are rather unsubtle considering the tone of the rest of the movie – but I don’t think the piece is hopelessly vandalised as a result of its inclusion. Helpfully, there is no indications that anyone aside from its assigned victims ever actually sees the demon, so it can still fit within the central ambiguity that Tourneur plays with over the course of the entire story – whether the demon is a real entity, or a figment of the imagination evoked by the power of suggestion.