The Death Wish movies have a lot to answer for. Brian Garfield, author of the original novel, was aghast at the extent to which the original 1974 movie seemed to endorse the sort of vigilantism his story was intended to criticise. Revisiting it later, it’s at best a movie in two minds as to whether the sort of campaign of premeditated killing on the part of Charles Bronson’s revenge-obsessed protagonist is justified. 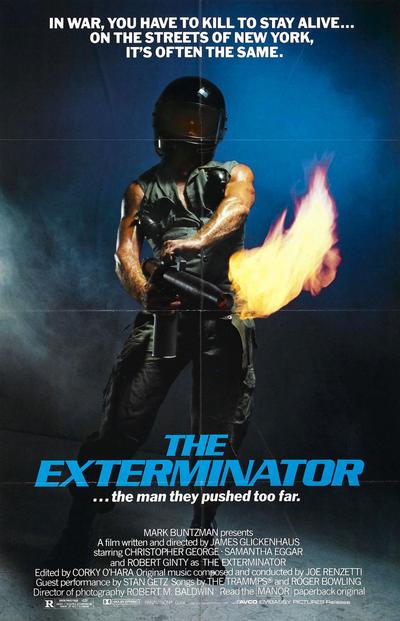 The sequels, though… the sequels were made in the 1980s; a brighter era, an era of more simplistic moral messages, altogether a more Reagan-y era than 1974. They are vastly less ambiguous than the original; they embrace vigilantism as a 100% perfectly OK thing and are only too glad to depict Bronson slaying absurd numbers of criminals – and if those criminals happen to tend to be of particular ethnicities, all the better.

The series was much-imitated at the time, but in the long gap between 1974’s Death Wish and 1982’s Death Wish II you could see the cultural shift that made Death Wish II a viable commercial prospect happening in the public’s appetite for material like 1980’s The Exterminator, which is basically Death Wish with a flamethrower-touting Vietnam veteran protagonist for an extra dose of uncomfortable badassery.