As any fule kno, the success of Conan the Barbarian spawned a small cottage industry of sword-and-sorcery movies which were almost, but not entirely, completely unlike Conan. Enterprising filmmakers realised that they didn’t need good acting, a decent script, passable special effects or anything else to make a good fantasy film – they just had to make sure there were plenty of swords and bare flesh onscreen at all times and make sure the poster is painted by someone who can do a decent impersonation of Boris Vajello’s style. So tempting was the simplicity of this formula that even Conan sequel Conan the Destroyer and Conan pseudo-sequel Red Sonja succumbed to it, rather than actually retaining the finer qualities of John Milius and Oliver Stone’s original. 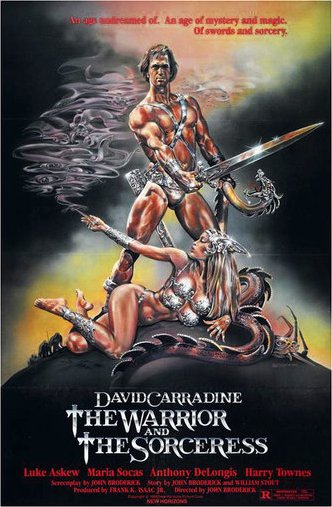 But the true masters of this horrifying development in the fantasy genre were the low-budget studios who cranked out crap like Deathstalker, famous mainly for having a scene where an orc beats a man to death with his own arm, Barbarian Queen, famous mainly for starring that actress that Phil Spector murdered,… and The Warrior and the Sorceress, famous mainly for giving a job to a quite out of shape and quite probably drunk David Carradine.