Taguchi (Kenji Mizuhashi) is working on some project on a computer disk for his friends; he is late getting it back to them, and when Michi (Kumiko Aso) goes to check in on him his flat is a mess and he’s seems to be rather distant, though cordial. After pointing out where Michi can find the floppy disk, Taguchi slips into his bedroom and hangs himself, leaving her to discover him moments later. 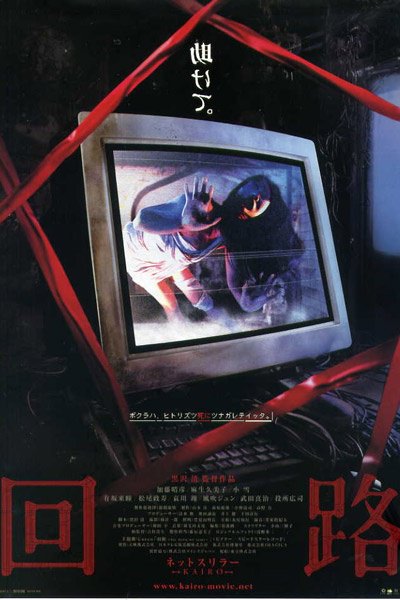 By itself, that would be a tragedy, but when the friends check on the disk they find disturbing images shot in Taguchi’s flat. Meanwhile, the movie implies some connection between this and the strange glitches that start happening here and there in the town – like computer-illiterate student Kawashima (Haruhiko Kato) being woken up in the middle of the night by his new dial-up modem connecting to the Internet and loading a series of odd images, and a website which asks him if he wants to meet a ghost, or the strange image on Taguchi’s disk appearing on someone’s phone screen. (A major feat for a basic pre-smartphone from the early 2000s!) Things don’t get really sinister, though, until our protagonists start noticing certain lonely doors sealed with red packing tape – and are inspired to explore inside.