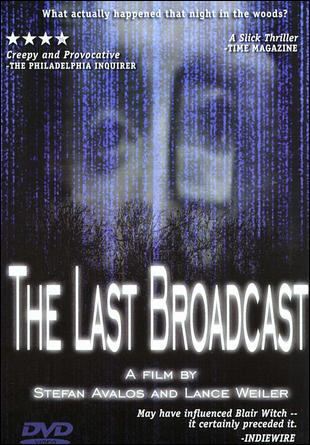 Steven “Johnny” Akvast (Stefan Avalos) and Locus Wheeler (Lance Weiler) are the hosts of Fact Or Fiction, a New Jersey public access cable show about the paranormal which is watched as much for amusement value at its incompetent production values as for actual interest in its subject matter. Kicking off in 1995, the show has its moment of popularity before its fortunes begin to wane as the joke starts to wear thin. Come December, they decide to do something a bit more spectacular than their typical studio chat – namely, a live broadcast from the depths of the New Jersey Pine Barrens, with material going out live on the Internet, cable, and amateur radio, where they would attempt to hunt down the Jersey Devil.

Roping in sound engineer and electronic voice phenomena enthusiast Rein Clacklin (Rein Clabbers) as their sound man and Jim Suerd (James Seward), a purported psychic (and actual stage magician and hoaxer) who claims that he can use his powers to get them to the right location to find the Jersey Devil, they set off. Only Suerd ever returns; Akvast is never found, but the mutilated bodies of Wheeler and Clacklin are eventually discovered. It’s assumed to be an open and shut case, with Suerd the obvious suspect; he’s railroaded through a trial which is heavy on circumstantial evidence and low on actual material unequivocally connecting Suerd to the deaths. (There’s some bloodstains on his clothes that provide a DNA match… but it seems unthinkable that he’d be able to do what was done to those bodies and only get a few blood spots on his clothing, rather than completely drenching it.)

Later, in 1997, documentary filmmaker David Leigh (David Beard) decides to investigate – and it’s his documentary about the case which we watch, filled out with extensive footage from the Fact Or Fiction archives and the fatal New Jersey shoot. Midway through his production process, Suerd dies under unexplained circumstances in prison; Leigh also anonymously receives footage from the Pine Barrens incident that never made it to the hands of the authorities. Can he work with Michelle Monarch (Michele Pulaski) to reconstruct the missing tape and uncover the truth behind… The Last Broadcast?