Shutter Island, Martin Scorsese’s adaptation of Dennis Lehane’s novel, is Leonardo DiCaprio’s other major release of 2010 featuring an intense protagonist haunted by a deceased wife and revealing dreams. DiCaprio plays Teddy Daniels, who along with his new partner Chuck Aule (Mark Ruffalo) are US Marshals sent to remote Shutter Island. The island’s main attraction is the Ashecliffe Hospital, an asylum for the criminally insane. Run by the personable Dr John Cawley (Ben Kingsley), the asylum is half penitentiary, half hospital; all of its residents have been convicted of violent crimes – usually murder – but Dr Cawley claims to do his best to create as pleasant and agreeable an environment for them as circumstances allow. Ahead of his time in some ways, he doesn’t believe in surgical interventions or drugging his patients, and prefers to cure them with kindness – of course, there’ll always be a certain number of patients who won’t respond to that, and that’s why they have Ward C in the old (slightly unconvincingly CGI’d) Civil War fortress on the island. 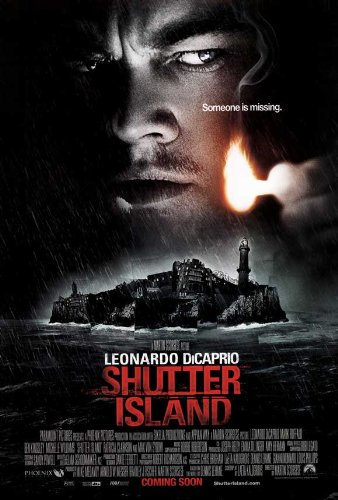 Daniels and Aule are there to investigate the disappearance of Rachel Solando (Emily Mortimer), a patient who was institutionalised after drowning her three children and who, according to all reports, is so divorced from reality she believes her children are still alive and won’t even acknowledge that the asylum is an asylum. Soon two things become clear: firstly, that almost everyone Daniels and Aule meet are trying to keep a secret from them, and secondly that Daniels himself has his own demons – he’s haunted by flashbacks both of his experience as an infantryman in World War II involved in liberating some of the death camps and of his wife Dorlores Chanal (Michelle Williams), who died in a house fire. He’s determined not to let either that or the asylum authorities’ lack of co-operation stop him solving the case though. In fact, his dreams in which his dead wife comes to him and gives him pointers about the case might even help a little.