Be aware that I reveal plot details in this review, but I refuse to call them “spoilers”. This film came pre-spoiled; it was ruined in the production process, wrecked before it left port, shot down in flames as it left the runway. Christian Bale’s infamous meltdown on the set is the most entertaining thing to come out of this film, and it’s free to listen to on YouTube, so there’s no need to give this overhyped abortion any of your hard-earned money. (I and some comrades went on Orange Wednesday, but nonetheless I resent every penny spent.) 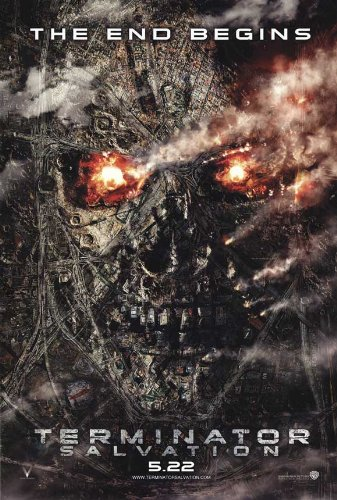 Let me start out by saying that I don’t think there is a single, “right” way to do the Terminator franchise. Patriots look to the first two films with a tear in their eye and pride in their heart, and that’s more than appropriate, since they are by far the best the movies have to offer. (I make no comment on The Sarah Connor Chronicles, seeing how I haven’t watched it, but a Terminator spin-off that understands that James Cameron’s original vision was always more about Sarah Connor than it was about John definitely has its heart in the right place.) At the same time, it’s easy to forget that The Terminator and Terminator 2: Judgement Day do not present 100% consistent visions. The most obvious example is in their treatment of time travel: in The Terminator the future is coldly deterministic and as immutable as the T-800; in Judgement Day we find that it is possible to change the future, that our fate is in fact as liquid and mutable as the T-1000. James Cameron offered two highly divergent views on the same premise, which led to a pair of movies with very different tones that nonetheless represent a single artistic vision, with Cameron offering point and counterpoint.