Released in the States as The Conqueror Worm for the sake of implying a connection to the successful run of Poe adaptations that Roger Corman had helmed and Vincent Price had starred in, Witchfinder General only shares Vincent Price in common with those movies. It was directed by Michael Reeves, an up and coming talent whose career was cut short when he died shortly after making this of an accidental overdose, and produced for Tigon, a production company making a bid to outdo Hammer by offering up films with similar subject matter fronted by horror icons and often featuring content more extreme – and more imaginative – than Hammer themselves were willing to offer at the time. (The production was also co-funded by AIP, home of the Poe adaptations – hence the retitling, hence the involvement of Price.) 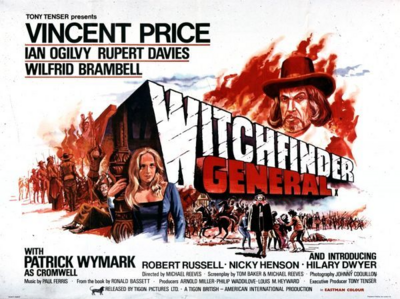 The story takes place during the English Civil War (the famous mid-17th Century one, not the earlier one with Stephen and Matilda). Richard is a soldier in Oliver Cromwell’s New Model Army, fighting the Royalist forces whilst hoping to make a future for himself and his fiancee Sara once the war is done. Their happy plans, however, are disrupted when their sleepy home village is visited by Witchfinder General Matthew Hopkins (Vincent Price) whilst Richard is away on duty. Hopkins, accompanied by his disreputable assistant John Stearne (Robert Russell), roams around the country exploiting the disorder and panic caused by the war, showing up in towns and villages which have written to them asking for their help and presiding over witch trials that make those in Salem look like a model of balanced and fair jurisprudence.

They are well paid for this work, and they relish the opportunity to torture their suspects to their hearts’ content (though Stearne is much more honest with himself and others about how much he enjoys this part of his work than Hopkins, who maintains a holier-than-thou facade. They’ve been summoned to the village to interrogate the local priest – Sara’s uncle – and Hopkins wastes little time in extorting sexual favours out of Sara in return for stopping the torture. Eventually, Stearne ends up raping Sara, Hopkins loses interest in her, and her uncle and two local women are eventually strung up for witchcraft. When he returns and discovers what has happened, Richard embarks on a campaign of revenge that he’s determined will put an end to Hopkins’ reign of terror – but what will he end up losing before the job is done?