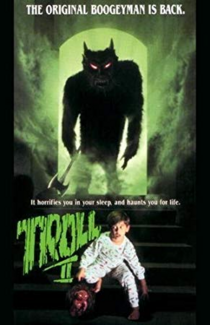 The story is well-known, Troll 2 having been skewered on bad movie websites since the early days of the Internet. The Watts family – father Michael (George Hardy), mother Diana (Margo Prey), older teen daughter Holly (Connie McFarland) and preteen son Joshua (Michael Stephenson) – have had a rough time of it, what with Grandpa Seth (Robert Ormsby) having died six months ago and Joshua regularly seeing vivid visions of Seth delivering bizarre warnings about goblins.

These warnings come thicker and faster as the Watts family embark on a holiday trip to Nilbog, a tiny rural town that happens to be the home of a gang of goblins with a remarkable knack for disguising themselves as human beings but absolutely no subtlety when it comes to coming up with town names. (Joshua only figures out the Nilbog/Goblin thing after seeing the town’s name reflected in a mirror, because ultimately he’s just not that clever a kid.) The goblins are strict vegetarians, but also love murder and anthropophagy, so they have a fun little compromise: before they kill people, they feed them an evil potion concealed in ordinary food which transmutes unsuspecting humans into vegetable matter.

There’s a wildcard factor provided by Holly’s loser boyfriend Elliot (Jason Wright) and his loser friends Arnold (Darren Ewing), Drew (Jason Steadman), and Brent (David McConnell) coming along in their RV in the vague hopes of getting laid – but they’re made short work of by the goblins and their leader, the gothy druid Creedence Leonore Gielgud (Deborah Reed). Will the Watts family be able to summon Grandpa Seth back from the dead in a necromantic seance to help out in the final conflict? Will Seth and Joshua be able to destroy the “Stonehenge Stone” which gives Gielgud her powers? And what power lies within Joshua’s special double-decker bologna sandwich?