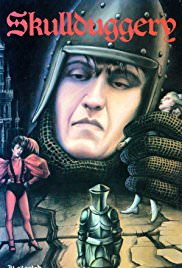 Adam (Thom Haverstock) is a mild-mannered assistant in a costume shop, good friends with Barbara the nurse (Wendy Crewson), who he is in the same RPG playing group with. However, unbeknownst to him Adam’s ancestor, a medieval king, was put under a Satanic curse by an evil wizard. Now, Adam is falling under the sway of the curse, as a Mr Punch puppet seems to follow him around and a mystery puppetmaster assembles the allegorical pieces of the puzzle of Adam’s life in the shadows. Adam has mysterious moments where his behaviour is not under his own control – and they often have some sort of metaphorical connection to the action in the RPG campaign he and Barbara are playing in. Over the course of three long setpieces – a local college’s variety show, a visit to the hospital where Barbara works, and a wild costume party thrown by a suave and mysterious aristocrat unironically referred to as Doctor Evil (David Caldiersi) – Adam will kill and kill again both through occult means and through a more direct approach. How many will die before he is stopped, and will he survive the ancestral curse?

That’s all fun enough, but I’m making this film sound way more coherent and well-structured than it actually is. It has many, many similarities to Mazes & Monsters (Wendy Crewson even appears as the token woman at the gaming table in both movies), and one of those is that it’s only available on DVD in a dubious release that seems to have been taken directly from a VHS source. As a result, the picture quality is so bad that some plot details aren’t immediately obvious except on repeated viewing – for instance, I didn’t get at first that at the conclusion of the movie it turns out somebody was a different character in disguise all along, or the painting that Doctor Evil is assembling like a jigsaw over the course of the movie appears in the medieval backstory sequence in the background.