1980 was a good year in the middle of a sea of middling years for Sean Connery; as well as having a decent cameo in Time Bandits, he had a starring role in Outland, a criminally overlooked SF production written and directed by Peter Hyams. 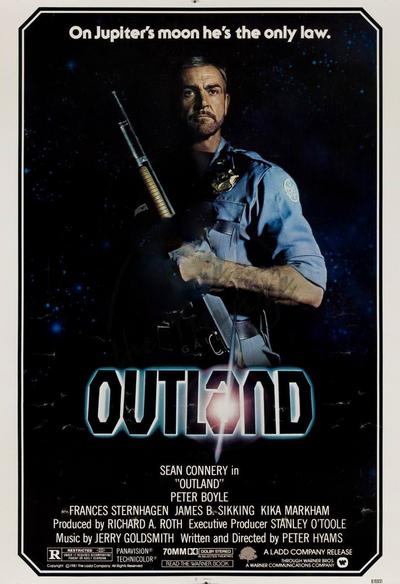 Connery plays William T. O’Niel, the Federal District Marshall brought in to lead the security teams on Con-Am 27, a mining colony on Io, one of Jupiter’s moons. O’Neil has barely arrived when not one but two miners go insane and end up getting themselves killed by explosive decompression, and another guy loses his shit and brutally attacks a prostitute at the company-sanctioned brothel. O’Niel’s investigations reveal that all the workers who went insane had been taking a dangerous new drug – polydichloric euthemol, a devastatingly powerful amphetamine which lets users work at an outrageous pace, eventually causes psychosis with continued use. O’Niel realises that because the workers are producing way more than they would have without the drug, the company isn’t going to help him track down who’s responsible – and they might be the guilty party themselves. Sure enough, O’Niel’s efforts to curtail the drug smuggling operation brings him into conflict with Sheppard (Peter Boyle), the mining operation’s general manager, who eventually resorts to hiring a trio of feared hit men to come to Io and take O’Niel out.