Brought to you by Groundglass Entertainment – appropriately enough, since watching it is like having ground glass vigorously applied to your soft bits – Dragon Hunter is a 2009 fantasy film so bad that the sole trailer on the DVD is for Uwe Boll’s In the Name of the King: A Dungeon Siege Tale, as though that were the only film willing to be associated with this dreck. 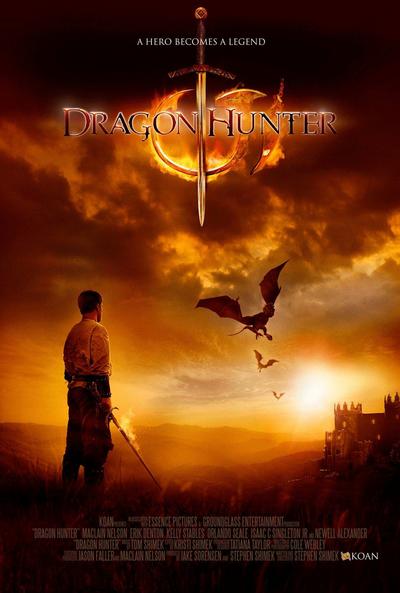 The plot goes like this: Darius (Erik Denton), a competent warrior who is reputed to be one of the mysterious Dragon Hunters and his brother Kendrick (Maclain Nelson) live in the mystic forest of Elwood, with Darius earning his way as an orc-hunter and Kendrick making a living carrying buckets. One day, dragons and their orcish allies attack the village the brothers call home, and the pair head off to a place called Ocard. It takes a good while before the film lets us know exactly why Ocard is a big deal, but eventually it transpires that it’s the place you go to become a Dragon Hunter. Which of the two brothers is destined to take up this role? Is it Darius, who shows something resembling competence and good judgement and combat expertise, or is it Kendrick, who can just about be trusted to carry a bucket and pout at people? (Spoiler: of course it’s fucking Kendrick.) Along the way they hook up with a mercenary band which consists of some forgettable soldiers, the elven scout Raya (Kelly Stables), and the mysterious berserker Olick (Isaac C. Singleton Jr.), a man reputed to be “half-beast”, and who is a hulking, mute presence that most of the other characters are intimidated by. He is, of course, the only black character. Whooops.

(Why yes, there is a moment where he finally speaks and lays some big time wisdom on our hero just when he needs it the most. How the fuck did you guess?)