Ju-On: The Grudge sits firmly within the so-called “J-Horror” genre – like The Ring and Project Zero before it, it features Japanese folklore, low-gore/high-creepiness scares, modern technology hijacked by traditional ghosts, ESP, flashbacks rendered in grainy monochrome, and all the other tropes of the genre. Although the film came out in 2003, it’s the follow-up to two straight-to-video movies from 2000, which themselves expanded on a pair of short films from 1998; written and directed, as the previous films were, by Takashi Shimizu, the story itself is essentially a new take on the same premise as the earlier parts, taking into account the lessons learned during the making of the earlier instalments. 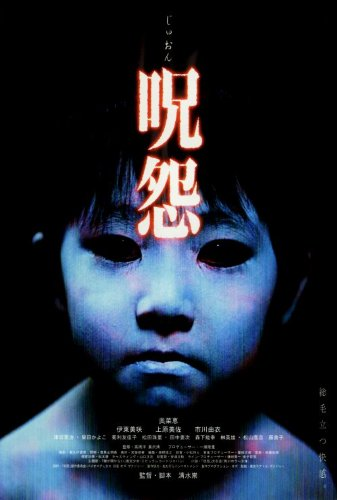 You wouldn’t know this wasn’t the first film in the series though – I didn’t realise it wasn’t until I looked it up on Wikipedia to research this article. Although apparently there are references to the earlier parts scattered about here and there, it really isn’t necessary to pick up on them to follow the story, which is fairly self-contained. The Grudge opens with a flash card explaining to us the legend of the Ju-On, a curse on a location left by one who has died in a state of extreme rage; the curse draws in and destroys the lives of others, feeding on them to establish itself more firmly and to widen the range of its activities. Over the course of the story (which is told non-chronologically), we see how the curse first acts on people in the haunted house at the centre of everything, but as time goes by it reaches out into the world more and more frequently to sate its hunger – even when it mainly favours people who have visited the house previously, it by no means exclusively preys on them.