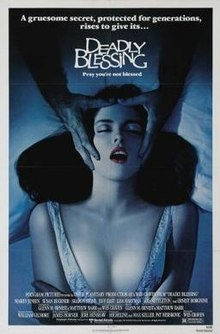 Out somewhere in the vast American countryside is a little farming community where the agrarian Hittites – a religious commune with a similar distaste for modern technology and dress sense to the Amish, but with substantially stricter internal rules – live next door to neighbours of a far more conventional and modern bent.

Caught between the two communities are Martha and Jim Schmidt (Maren Jensen and Douglas Barr). Jim is the son of Hittite leader Isaiah (Ernest Borgnine), and inherited from his family the farm and farmhouse called Our Blessing. But he is no longer with the Hittites; the first of the sect to go to the big city (Los Angeles, in this case) to get an education, he learned worldly ways and met and married Martha, an outsider, and brought her back as his wife. That was more than enough to get him expelled by Isaiah – causing greatly conflicted feelings in John (Jeff East), Jim’s brother who stayed at home and remains a devout Hittite.

One day, a nasty incident – I hesitate to call it an accident when there’s so much implication there isn’t – happens in the barn, killing Jim. Martha is pregnant with Jim’s child, and reaches out for support – both to her neighbour Louisa Stohler (Lois Nettleton) and Louisa’s daughter Faith (Lisa Hartman) and to a pair of her old college pals, Lana Marcus (Sharon Stone) and Vicky Anderson (Susan Buckner). Martha wants to at least stick around on the farm until Jim’s child is born, but has to contend with various troubles, the most obvious being the hostility of the Hittites. Isaiah makes it clear that he’ll gladly buy Our Blessing from her at a very generous price – with the unspoken corollary that she go far away back to the big city – but she refuses; tension also arises from Vicky and John being very obviously attracted to each other.

And then there’s William Gluntz (Michael Berryman – perhaps most famous as the iconic lead cannibal from The Hills Have Eyes). William, who won’t stop pestering Faith (who, for her part, exhibits a decidedly unusual view of the world through her painting – one more appropriate to a macabre surrealist than the unsophisticated farm girl she appears to be). William, from whom Martha first hears the word “Incubus” – denoting some evil force that the Hittites regard Martha and much of the outside world to be under the influence of. William, who can’t seem to leave the Our Blessing farm alone. William… whose stabbed corpse is discovered hanging in Our Blessing’s barn, under circumstances which make it clear that someone or something is out to terrorise Martha and her friends. Just what are we dealing with here – a slasher with a grudge against Martha, someone out to hurt both her and her quasi-Anabaptist neighbours, or something outright supernatural?