The powerful Lord Hidetora Ichimonji (Tatsuya Nakadai) is aging; everyone knows this, and his allies Lord Fujimaki (Hitoshi Ueki) and Lord Ayabe (Jun Tazake) are already looking to marry off their daughters to his youngest son. One day, after a nap, Hidetora has a vision and conceives a plan that he hopes will maintain the balance of power after his death; he abdicates in favour of his eldest son Taro (Akira Terao), giving him the First Castle of his realm, whilst bestowing on his second son Jiro (Jinpachi Nezu) and third son Saburo (Daisuke Ryu) the Second and Third castles and the lands under their command – the idea being that this division of power would guarantee that his three sons will work together to keep the Ichimonji lands strong.

The obedient, dutiful, and flattery-prone Taro and Jiro are happy to go along with this – but third son Saburo, who is honest to the point of rudeness, unconventional, and defiant, thinks the plan is an awful idea and Hidetora has taken leave of his senses, and declares as much. Tango (Masayuki Yui), one of the attendants witnessing this, points out that a Lord is better served by those who speak their minds and tell him things he doesn’t want to hear than those who refuse to say no to him. 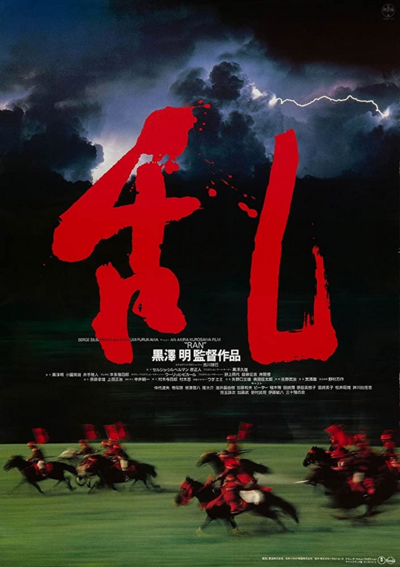 Hidetora is infuriated, and as one of his last acts in charge banishes both Tango and Saburo. Not only does this immediately destabilise the balance of power between his sons that Hidetora had planned, but this fracas was witnessed by both Lord Ayabe and Lord Fujimaki, who both in their own way realise the trouble and opportunity that must come from this. Lord Ayabe rejects the idea of marrying his daughter to any of the Ichimonji sons, whilst Lord Fujimaki realises that by arranging a marriage between his daughter and Saburo he can get a son-in-law with a claim to Ichimonji lands – and one who has demonstrated just the sort of combination of honesty and loyalty that appeals to him.

Meanwhile, at the First Castle, Taro’s men and Hidetora’s attendants come to blows after Taro’s wife Kaede (Mieko Harada) insists on him asserting his rights as overlord of the Ichimonji, and Hidetora finds his recollections of the terms of his abdication differ from the record offered by Taro. (Kaeda isn’t just doing this on a whim – she was born in the First Castle and raised there before Hidetora conquered it, so now she is mistress of the Castle it make sense that she resents any authority Hidetora tries to exert.) As the family bonds between father and son break down, soon enough the brothers find themselves pitted against each other, and eventually Hidetota finds himself an exile in his own lands, with only his court jester Kyoami (Peter) for company, forced to witness first-hand the utter destruction of the peace he tried to engineer as war engulfs the land.