Previously On Michael Bay’s A Boy and His Robot…

In the first Transformers movie Michael Bay presented a competent and tongue-in-cheek movie about robots smashing the crap out of each other, fused at the hip with a less interesting teen comedy and a completely bland war movie. His intent with the sequel seems to be to provide more of the same. Does he succeed? Let’s watch.

I Saw the Best Robots of My Generation Destroyed By Megatron

Apologies in advance, by the way. This review is going to be more than a little disjointed, but I can only plead that this is the fault of the source material. Transformers: Revenge of the Fallen is an incredibly incoherent movie. Whereas the separate strands of the first Transformers film eventually came together smoothly and naturally, the different threads of Revenge of the Fallen never quite integrate into a single powerful story, to the point where I’m finding it almost impossible to do the same for my review. So I’m likely to hop about from subject to subject a bit as I try to make sense of this horrendous mess. 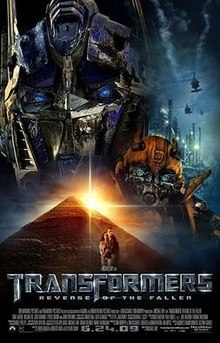 That said, it’s my understanding that the writing process for this film was impacted by the writer’s strike, and to be fair the major flaw of the film lies in the writing. You can’t say anyone does much acting in this film, but the actors say their lines without giggling at the stupidity of them and the CGI robots are a bit easier to distinguish from one another these days (although not much easier) and the direction doesn’t involve so much camera-shaking that it becomes impossible to follow the fights. It’s the script which introduces most of the idiocy, and I’m genuinely baffled as to how I’m supposed to take it. A lot of the scenes are played for laughs, even more so than in the first film, but at the same time the script is crammed with elements that on the face of it seem intended to be taken seriously, even though they are actually just as daft. The intervention of the Great Robot Gods at the end is the culmination of all this: it’s like the scriptwriter wanted us to take the Robot Gods seriously but Bay couldn’t keep a straight face. It’s almost as though they went looking for the worst fanfic they could find and then made a parody of it.

The rest of this review will consist of nitpicking and rants, I’m afraid.

END_OF_DOCUMENT_TOKEN_TO_BE_REPLACED

Michael Bay’s attempt at directing a live action Transformers movie has had mixed reviews, but I can’t complain about it. Here’s the one sentence spoilerless review: if you remember the Transformers cartoons from when you were a kid in the 1980s, this one’s for you. If you can’t, it’s not.

Let’s face it: despite several limp remake and spin-off series in recent years, Transformers is essentially a phenomenon of the 80s. Anyone too young to have seen the cartoons back when they were cool probably has more affection for later kids’ shows, and anyone who was too old for Transformers when it came out won’t necessarily feel nostalgic about it – especially if they were parents. Those toys were expensive.

Bay has therefore not made a children’s film, and he’s not made a film for a general audience. Instead, he’s made an unabashed nostalgia-fest for the Transformers generation, which relies as much on gentle parody and “hey, remember this from the cartoons?” as it does on CGI special effects and workmanlike acting.