Paranormal Activity is not a novelty in terms of the story it tells or the manner in which it tells the story. Stories about a couple or a family being tormented by ghosts are as old as the idea of ghosts in the first place, and films such as Poltergeist and The Amityville Horror incorporated recurring ideas and concepts from real-life accounts of alleged hauntings into their stories to good effect. And the “found footage” subgenre of horror films is not short of precedents; The Blair Witch Project was, of course, a big hit, and that was preceded by the superior but more obscure The Last Broadcast. And it’s an adaptation to film of a significantly older horror story format; some of H.P. Lovecraft’s best work made liberal use of faked-up press clippings, diary entries and letters, for instance. 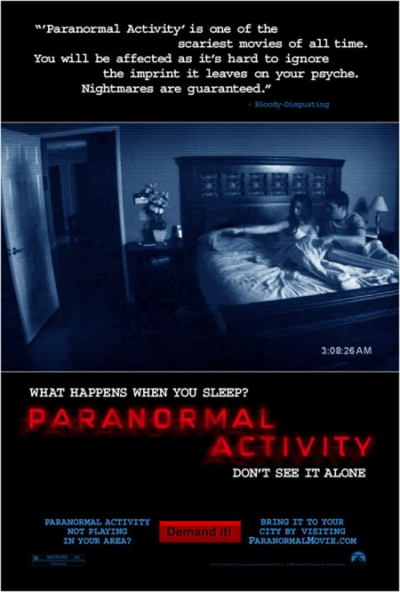 What’s more, whilst Blair Witch was a product of the 1990s, Paranormal Activity came out in 2007. The big thing that happened between the release of the two was YouTube. The Internet is far and away one of the most exciting and best-suited mediums to telling stories in the found footage/documents genre, especially if you’re working on a small or nonexistent budget. Whilst The Blair Witch project came from a dial-up era where it only really had to deal with things of a similar level of technological sophistication to Ted’s Caving Page or The Dionea House, Paranormal Activity exists in the broadband age, when anyone with sufficient talent can make something like No Through Road or Marble Hornets and a large proportion of the audience can view it without waiting an especially long time for stuff to download. For a found footage-styled film to seem worth it in the Internet age, it needs to do several things: firstly, it needs to have enough interesting content to make it seem worth making a 90 minute movie out of it as opposed to a 10 minute YouTube video. Secondly, the editing and the acting need to walk a fine line; they need to be professional enough to be of a higher standard than your average amateur YouTuber brings to the table, whilst at the same time remaining naturalistic enough to appear as though this is actual found footage rather than something artificial and staged.