The Tetsuo movies by Shinya Tsukamoto get mentioned whenever you look at the Japanese cyberpunk genre. “Japanese cyberpunk” is simultaneously a very apt and a very misleading term; on the one hand, it does touch on a whole heap of the same themes as the rest of cyberpunk, but on the other it does so with such a different and idiosyncratic approach that sometimes those links aren’t so apparent. That’s especially true of the Tetsuo material, where Tsukamoto has this regular habit of slowing the plot down to an absolute crawl so he can communicate a particular idea in excruciating detail, usually by throwing in a surreal sequence comes across more as an Einstürzende Neubauten music video than an attempt at conventional cinematic narrative. 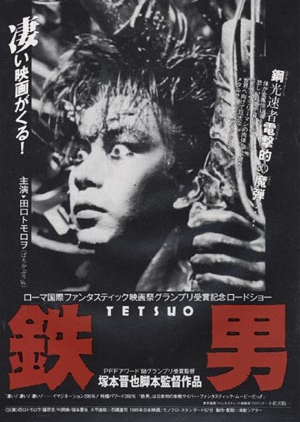 This is especially true of the first one, Tetsuo: The Iron Man. It wears its Eraserhead influence on its sleeve and it’s widely seen as being similarly plotless, but I actually think the plot here is much more straightforward than Eraserhead – it’s just that the plot is sufficiently thin that if it weren’t for the highly unusual manner of its delivery, the movie would be done in 10 minutes (and as it stands it barely breaks an hour in running time).