If films based on computer games have a patchy history, films based on tabletop RPGs have an even worse one. Admittedly, there haven’t been many produced; there are the two Dungeons & Dragons movies, and the Dragonlance film, and very little else. I’m not, for the moment, going to consider things like Underworld which are very obviously inspired by particular RPG settings but aren’t licensed adaptations, but even they have a patchy record – and arguably Underworld isn’t really about exploring a thinly-veiled version of the World of Darkness so much as it is Len Wiseman’s epic treatise on how much he appreciates his wife’s buttocks. 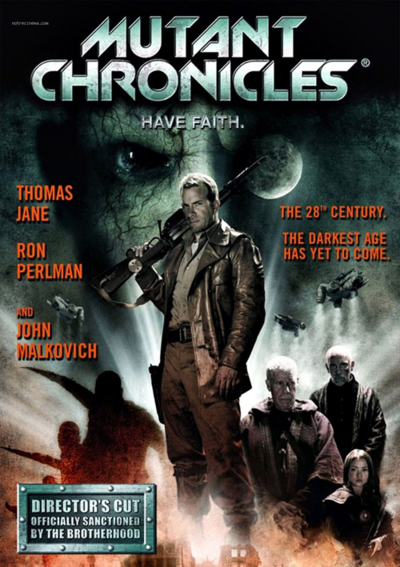 Mutant Chronicles is not going to change the scorecard. Its history is convoluted. In the mid-1980s Target Games, Sweden’s most significant native publisher of tabletop roleplaying games, put out the Mutant RPG, which had a post-apocalyptic premise reminiscent of games like Gamma World. Subsequent editions and spin-off games would explore a variety of different premises; Mutant Chronicles itself came out in 1993 and had a science fantasy setting in which great corporations had spread out into the stars but a dire curse had brought apocalyptic devastation to Earth. Eventually, Target Games went under, the rights to Mutant Chronicles were picked up by Paradox Entertainment, and the great licensing game began; Fantasy Flight Games got a license to make a miniatures wargame based on the setting, COG Games were licensed to produce the tabletop RPG and then spectacularly failed to do anything with the rights for three years so the license was revoked. And Grosvenor Park Productions got to make the movie.