Margaret (Anne Carlisle) and Jimmy (also Anne Carlisle) are in-demand models and regulars on the Noo Yoik new romantic club scene, and gosh do they love themselves some heroin. Cold, ruthless Jimmy prowls around, getting money and drugs where he can and caring only for his own personal gratification. Margaret lives in the dingiest penthouse apartment in New York, which comes with a lovely view of the Empire State Building, Margaret’s abusive drug dealer/avant-garde musician/Beat poet girlfriend Adrian (Paula E. Sheppard), and a UFO on the roof, about the size of a dozen crate of beer. 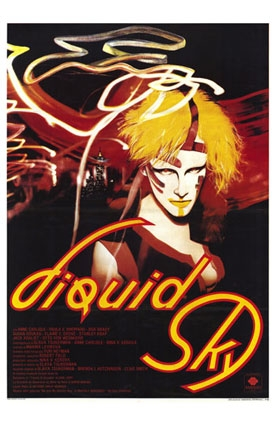 The inhabitant of the UFO is also quite into heroin – but the absolute best high, so far as the alien is concerned, is the endorphins produced by the human brain during orgasm. Margaret is cursed with a string of shitty hangers-on who don’t give two shits about consent, ranging from her hypocritical, disapproving college professor Owen (Bob Brady) who likes to cajole and emotionally manipulate her into sex to dudes who are happy to just drug and violently assault her for the shit of it. Whenever they orgasm in close enough proximity to the alien, it shoots a crystal into their brain to extract those sweet, juicy endorphins. (If you want to interpret this as an AIDS metaphor, you absolutely can – this came out in 1982, the year that AIDS officially picked up that name once the awful GRIDS acronym got retired.)

In an apartment across the street belonging to Sylvia (Susan Doukas), Jimmy’s mum, visiting UFO researcher Johann Hoffman (Otto von Wernherr) observes proceedings, having followed the UFO-heroin connection this far. With Margaret, who’s been pushed about and abused by far too many people in her life, suddenly given the power of life and death, what will she do with it, and what will she do once the enormity of what she’s done caught up with her?