The American slasher movie boom, once it got rolling, ended up in a race to the bottom really very suddenly. After Black Christmas was a modest success, Halloween and Friday the 13th ended up becoming monsters, earning back some 100-200 times their budget in the cinemas. The combination of astonishingly cheap budgets and apparently low standards on the part of the audience meant that a lot of crap was produced by people jumping on the bandwagon.

For this article, I’m going to take a comically huge machete and chop out a cross-section of the genre to look at, illustrating its decline over the course of the 1980s. I’ll start with a pretty decent 1981 release (with some major problems) from early on in the craze, move on to a more amateurish effort blessed with some fun effects from 1984 from the mid-1980s, and end up with a trashfire which crept out straight-to-video in 1985 in Spain before it finally got a domestic release in the US in 1987.

Content warning time: this article is about slasher movies, also one of them was made by Harvey Weinstein, so obviously rape and murder are just a shot away this time around. 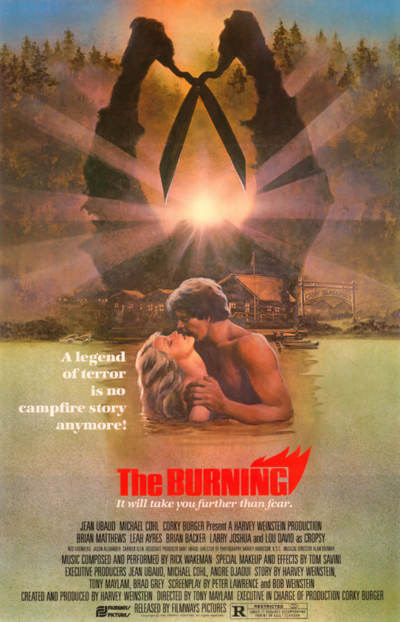 Once upon a time at Camp Blackfoot, some of the kids decided to play a cruel prank on the caretaker, Cropsy (Lou David), who was a bit of a hate figure among them. Having obtained a spooky old worm-riddled skull and slipped some candles into its eye-sockets to make it extra scary, they crept into his bedroom, set the skull on the table next to him, and then crept out and banged on the window to wake him up.