Today I have for you two little mini-reviews of movies made on a micro-budget, with swords and medieval nonsense aplenty. One of them is a joyful, colourful product of the early 1980s; the other is a shitty zombie movie from 2013. What do they have in common? They were both in my review backlog, that’s what! 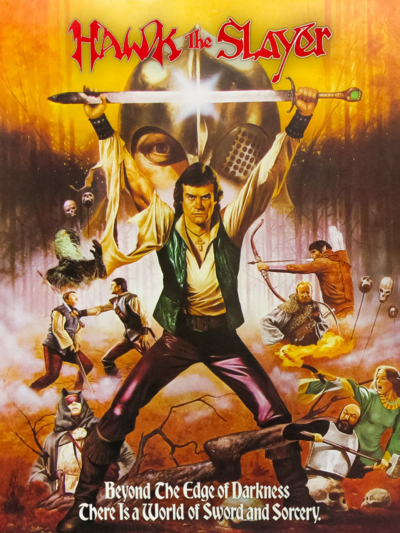 The sinister Voltan (Jack Palance) is the outcast son of some dude who doesn’t get to be named onscreen but I think is meant to be some kind of king (played by Ferdy Mayne, who was the same age as Jack Palance and looks younger in this). Grumpy about being outcast, Voltan breaks into the castle as the King (High Priest? Grand Vizier? President?) is meditating over a pool of dry ice in a hidden shrine lined with gold foil. Voltan’s younger brother Hawk (John Terry), a good boy who managed to reach adulthood without being exiled by the King (Duke? Earl? Prime Minister?) stumbles onto the scene just in time to hear the dying words of the King (Caliph? Mayor?), who has been fatally stabbed by Voltan. As his last act, the King (Prince? Doge? Emperor?) teaches Hawk the secret art of activating and commanding the MindSword, the blade that is their family’s heirloom and can be telepathically controlled by its rightful owner.