Umberto Lenzi’s career, like many Italian directors of his generation, would require him over the years to adapt to a range of different genres. Tending to work more towards the sleazier end of the spectrum, he’d happily turn out sword and sandal epics, spy movies, gialli, or whatever other flavour of schlock was in vogue at the time, though he also made some original contributions of his own – for instance, his Man From Deep River is considered to have kicked off the cannibal subgenre (and his later Cannibal Ferox is, alongside Deodato’s Cannibal Holocaust, held to be the point where people said “OK, enough of this, the ‘who can be grimmer’ competition is over and we have our tied winners”).

As with any Italian director from this era, the quality of his output varied widely. Lenzi seemed happy to pitch his movies at the level demanded by the genre he was working in – going a bit more sophisticated for giallo, a bit sleazier for zombie movies, and so on – and when Lenzi is truly phoning it in, the results are awful. (Ghosthouse is only worth watching in the Rifftrax version.) Here’s a brace of three of his movies which have had recent Blu-Ray releases to illustrate what I mean. 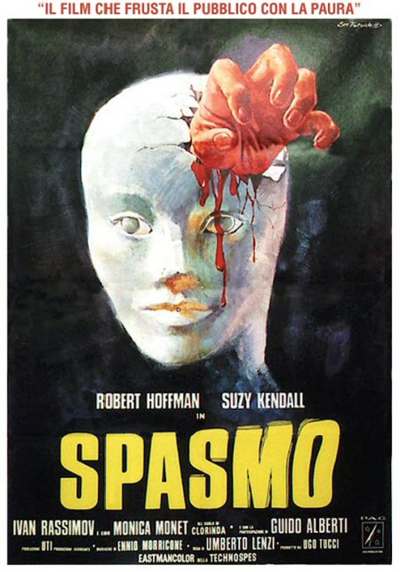 Despite its title sounding like the sort of playground insult that people should really know better than to use these days (it’s a perfectly legit Italian word which happens to sound terrible in English), Spasmo does in fact at least start off as one of the more clever giallos out there. A young man and his girlfriend ride their motorbike to a ruined cottage by the coast to get some privacy – though they’re not so concerned about privacy that they’re shy to ask a dark figure sat in a car a little way away from the cottage to light a cigarette for them. In the middle of their making out, they are interrupted by…