Released in the plague year of 2020 by Strange Attractor, There Is a Graveyard That Dwells In Man is a companion volume to The Moons At Your Door. Like that book, it’s an anthology of short stories selected by David Tibet, the creative mind behind the pioneering ambient industrial/apocalyptic folk project Current 93 – weird tales that have tickled his fancy and prompted his creative instincts over the years. 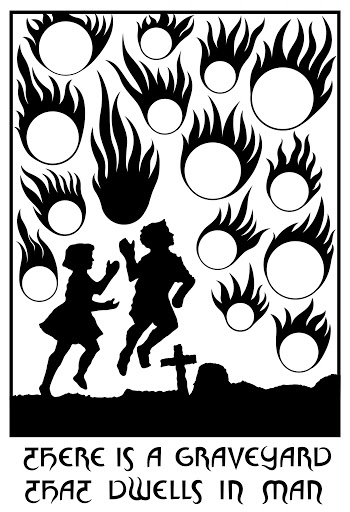 Two H.R. Wakefield stories bookend the collection; the first story here is A Black Solitude, which is notable for breaking from the precedent set by Wakefield’s own “He Cometh and He Passeth By” – and M.R. James’s Casting the Runes, which “He Cometh” was very much a pastiche of – by presenting a Crowley caricature who is not an antagonist but is instead presented much more sympathetically.

It’s not that Wakefield had suddenly gone full Thelemite or something – he still presents the thinly-veiled Crowley analogue as being 90% a big sleazy charlatan – but he’s much less hostile to that side of him, and he’s willing to credit the remaining 10% with some actual occult nous (but not enough to stop the culminating horror from consuming him). “He Cometh” emerged in 1928, whilst A Black Solitude was published in 1951, and evidently in the intervening years Wakefield seems to have decided that Crowley was kind of cool in his own way. (The character even has a celebrated mountaineering career, as Crowley had, which might have helped persuade Wakefield that Crowley wasn’t just a total waster.)

END_OF_DOCUMENT_TOKEN_TO_BE_REPLACED 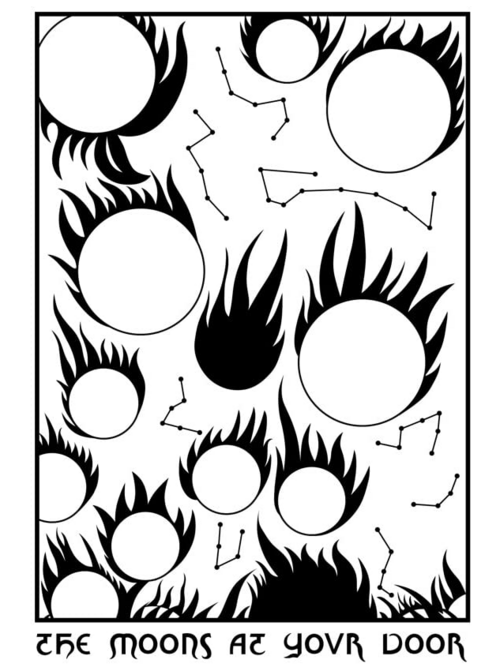 END_OF_DOCUMENT_TOKEN_TO_BE_REPLACED

Count Stanislaus Eric Stenbock (1860-1895) was until recently a comparatively forgotten literary figure. Montague Summers briefly mentioned enjoying one of his stories, but other than that his life and career was left largely uncommented-on for much of the mid-20th Century. John Adlard wrote a brief biography of him – Stenbock, Yeats and the Nineties – in 1969.

Timothy d’Arch Smith, who had aided Adlard with a bibliography of Stenbock’s work, would later mention him in Love In Earnest, a study of the English “Uranian” poets of the late nineteenth century – chaps like Lord Alfred Douglas who used poetry to explore themes of homosexuality, though in a way which in retrospect was rather problematic in the way it bluntly refused to separate out homosexuality from pedophilia in the way we would today. (Much inspiration was taken from Ancient Greek sexual mores, in particular.) Such was the Victorian period, when heterosexual men were hardly more discerning about the age of consent. 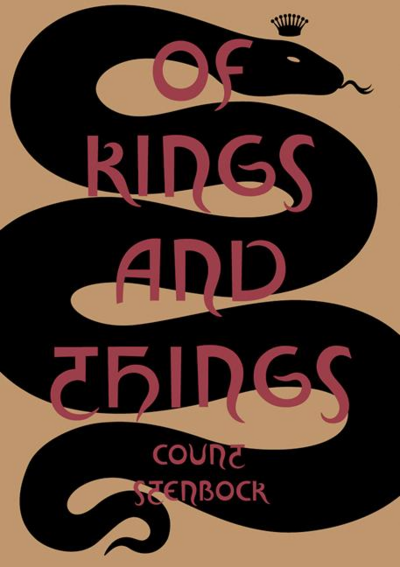 As a gay man with a tendency towards mysticism, religion, and art, it is no surprise that Stenbock should have shown up on the periphery of this circle, but that is hardly the only thing which stands out about him biographically, A member of the Swedish aristocracy whose ancestral lands were in Estonia, he was nonetheless born and raised in England, and after a brief stint in the old estate after inheriting his title in 1885 would largely make England his home base, though he would tour Europe extensively. Addicted to alcohol and opium, he scandalised not just with his sexual inclinations but his religious views, which seem to have involved a strange syncretic brew of Catholicism, homebrewed paganism, and Buddhism. A possibly-apocryphal story claims that in later life he was accompanied everywhere by a doll or puppet he referred to as his son, and that he’d paid a lot of money to a Jesuit priest to educate this puppet-son.

Though Adlard and d’Arch Smith kept Stenbock’s name in circulation, we largely have David Tibet – the mastermind behind the Current 93 musical collective that was one of the subjects of England’s Hidden Reverse – to thank for recent efforts to put his work back into circulation. D’Arch Smith’s account of Stenbock in Love In Earnest inspired Tibet to look deeper into Stenbock, perhaps in part due to the parallels between Tibet’s and Stenbock’s religious interests.

Though the Count only published three thin volumes of poetry and a single brief short story collection, Studies of Death, during his lifetime, the amount of Stenbock material available has increased appreciably thanks to Tibet’s efforts. In the late 1990s and early 2000s, Tibet had turned his hand to publishing through his own imprint, Durtro Press, and through this avenue he reprinted Stenbock’s collected poetry, reissued Studies of Death (expanding it with an additional story, plus two Stenbock translations of short stories by Balzac), as well as putting out volumes such as The Child of the Soul presenting previously-unpublished works of the Count’s. The Current 93 album, Faust – a return to the project’s dark ambient roots – included a booklet containing the Stenbock story of the same name, which was in fact the first time it had seen publication in any form.

More recently, Strange Attractor Press have released Of Kings and Things, a Tibet-edited one-volume collection of pretty much all the Stenbock you need, constituting so far as I can tell all the short stories of his yet published, plus most of his published poetry, plus a biographical sketch by David Tibet of Stenbock’s life and an afterword by d’Arch Smith detailing how he came to feature Stenbock in Love In Earnest – and how a reader from the publisher queried whether many of the writers featured in the book had even existed, which is a measure of the level of obscurity they had fallen into.

END_OF_DOCUMENT_TOKEN_TO_BE_REPLACED

Once upon a time there was a group of performance artists called COUM, who transformed into a band called Throbbing Gristle, who crafted a thing called “industrial music” out of the toxic sludge of mid-1970s Britain’s malaise. Eventually, that band broke up, and two of its members – Genesis P-Orridge and Peter “Sleazy” Christopherson – went on to form Psychic TV, a new band with an associated chaos magick occult movement called Thee Temple Ov Psychick Youth. Important contributors to both the first two Psychic TV albums (Force the Hand of Chance and Dreams Less Sweet) and the early propaganda and doctrines of TOPI included John Balance, a Throbbing Gristle fan who’d begun a relationship with Sleazy which would last the rest of his life, and David Tibet, an eccentric young man who was in the middle of a serious Aleister Crowley phase.

Meanwhile, gentle-natured music nerd and big time Krautrock fan Steven Stapleton had formed – and soon became the sole consistent member of – Nurse With Wound, whose surrealist experiments with sound tended to be lumped in with the “industrial” movement because Throbbing Gristle was the only thing which anyone felt able to compare it with.

Tensions arose within Psychic TV – with Sleazy, Balance, and Tibet all dropping out and establishing new projects. Sleazy and Balance would form the core of electronic industrial pioneers Coil; David Tibet would start producing nightmare soundscapes with a rotating cast of collaborators under the overall project name of Current 93. Befriending David Tibet, Stapleton soon became Current 93’s in-house producer, a position he’d hold more or less consistently for the next quarter of a century or so, and Stapleton, Tibet, Sleazy, and Balance would spend much of their future careers trading ideas with each other.

Eventually, all three projects would in their own way start expressing a strange and deeply non-traditional take on old-style pastoralism. David Tibet eventually reconfigured Current 93 as one of the most important exponents of what you could call “weird folk” of the latter 20th/early 21st Century, with musical partners such as Douglas Pearce from the controversial Death In June and, ultimately replacing Douglas, Current 93 superfan Michael Cashmore aiding him in producing some of the most delicately melancholy music ever produced. Coil would move to Weston-Super-Mare and start producing a more prog-oriented brand of “lunar music” as a counterpoint to the harsh “solar music” of their early career. Stapleton would move with his partner Diana Rogerson, who’d hit the industrial scene as part of the BDSM-themed performance art unit Fistfuck, to establish a family artistic commune in the west of Ireland, creating strange sculptures deep in the rural wilderness even as he continues to produce nightmare industrial soundscapes. 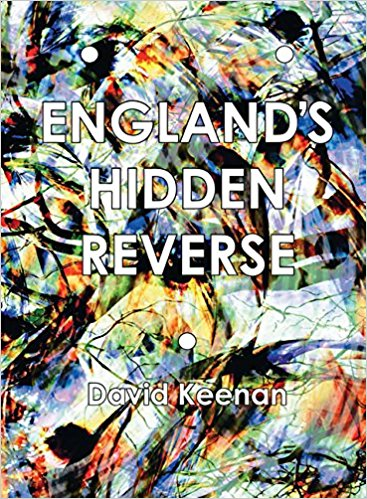 And through their various musical releases, the bands in question have produced a musical expression of rural and urban Englands which are very different from the sanitised take on the land that the authorities would have been comfortable with – what author David Keenan calls England’s Hidden Reverse.