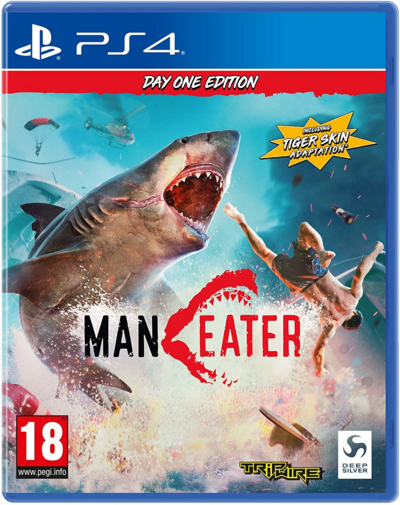 Over the process of this, the game’s rather fun conceit becomes apparent: it’s framed like it’s a basic cable reality show (called Maneater, natrually) about shark hunters operating in the waters off Port Clovis – a sort of mashup of Miami and New Orleans, in a state which is a sort of mashup of Florida and Louisiana. The shark hunter who killed your mommy shark (doo doo doo doo doo doo) and left you an orphan shark (boo hoo hoo hoo hoo hoo) is Scaly Pete, the show’s breakout start, his every Cajun quip treated as the producers as potential hashtag inspiration.

Over the course of the game, then, you guide your baby shark (doo doo doo doo doo doo) as she survives and grows, eventually becoming a mega shark (DOO DOO DOO DOO DOO DOO), and seek bloody revenge against Scaly Pete and all his fellow air-breathing assholes. Every so often, you get a cut scene checking in on what Pete’s doing, and your gameplay is narrated by the show-within-a-game’s narrator – Chris Parnell, AKA Cyril Figgis from Archer, whose wry commentary is probably the high point of the game.

END_OF_DOCUMENT_TOKEN_TO_BE_REPLACED

Cast your mind back to the late 2000s. Ferretbrain was just heating up. Bush’s second term was cooling off, or actually finally done with. RPG Maker freeware games had become widespread enough that the cliches of shoddy ones were as recognisable as the tropes of the JRPG genre they tended to sit in. Developers like Tale of Tales tried to stretch the bounds of indie gaming with material like The Path. YouTube was young, and 4Chan was mostly known for trolling Scientology. Pepe the Frog was a benign, nonpartisan figure.

Among the creative minds using the developing Internet as a platform was Chef Boyardee or cboyardee. Named after a pasta brand, Chef had an ear for a good chiptune and was an early YouTube animator, with his surrealistic, nihilistic, and disturbingly violent take on Dilbert being perhaps his most enduringly famous work. 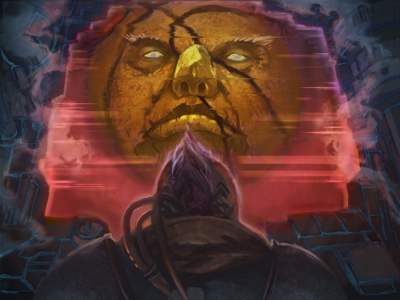 In early 2008, Chef was part of a team who released Barkley, Shut Up and Jam: Gaiden – Chapter 1 of the Hoopz Barkley SaGa, a Game Maker-created JRPG that was a sequel to both the Sega Mega Drive basketball game Barkley: Shut Up and Jam and the weird Looney Tunes-meets-NBA movie Space Jam. Chef’s music, witty writing, and a slew of borrowed and tweaked graphical assets combined to make an absurd parody game whose sense of humour, whilst now badly dated in some respects (and in some respects inappropriate at the time) found a cult following.

Then in 2012, when Kickstarter was experiencing its post-Double Fine Adventure boom, Tale of Game’s (yes, that’s how it’s spelled) ran a Kickstarter for a sequel, The Magical Realms of Tír na nÓg: Escape from Necron 7 – Revenge of Cuchulainn: The Official Game of the Movie – Chapter 2 of the Hoopz Barkley SaGa.

It is now eight years later, and it seems likely that a finished version of the game will never come out.

END_OF_DOCUMENT_TOKEN_TO_BE_REPLACED

Dragon’s Dogma was developed by a Japanese team at Capcom, which might turn off RPG fans used to the typical differences in design philosophy between Japanese CRPGs and their Western counterparts. That would be an enormous mistake; Dogma is, if anything, a slap to the face to the notion that JRPGs and Western CRPGs must necessarily be separate traditions worked on by separate developers. For the most part, the game resembles an action RPG take on Dragon Age or Skyrim, with the player free to explore the game world as they wish and with plentiful activities to do alongside the main plot, with a main character who is highly customisable. At the same time, it shares with JRPGs an emphasis on apparent endings that aren’t actually endings, eccentric cosmologies, a main plot which is essentially linear (though some major features, like the identity of your love interest, are variable), and a “New Game Plus” option to replay the game after completing it with new challenges and features.

Dragon’s Dogma casts a magnificently customisable “you” (wide range of body shapes and ethnicities can be realised here) as a simple peasant resident of the fishing village Cassardis. One day, your peaceful life is disrupted when the town is attacked by the terrifying dragon Grigori. Foolhardy sort that you are, you dare to stand and face the dragon, who delicately cuts out your heart and swallows it as you watch for your trouble.

END_OF_DOCUMENT_TOKEN_TO_BE_REPLACED

If there’s one thing that the Dragon Quest series (also known as Dragon Warrior) is known for, it’s consistency. The original Dragon Quest helped establish many of the conventions of Japanese CRPGs which Final Fantasy would popularise, and although Dragon Quest VIII: Journey of the Cursed King included beautiful graphics, a fun plotline, enchanting characters and engrossing gameplay, it was also an extremely traditional JRPG, complete with random encounters, turn-based combat, and grinding. 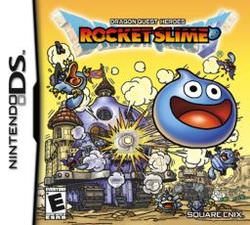 This makes Dragon Quest Heroes: Rocket Slime particularly interesting, because it’s such a spectacularly odd game, concerning as it does the adventures of a bouncy blue Slime and his enormous Slime-shaped tank.

END_OF_DOCUMENT_TOKEN_TO_BE_REPLACED

Okami is an action RPG for the PS2 in which you play Amaterasu, the Goddess of the Sun, who has incarnated as a white wolf to battle the evil eight-headed dragon, Orochi, and save the village he threatens. And it’s stunningly beautiful. The game is presented in a cel-shaded style which is meant to make everything look like traditional Japanese artwork, and by and large it succeeds. In terms of gameplay, the game is very much set up as a tribute to Zelda – you wander around the map, fight monsters, collect items, and solve puzzles in order to progress. 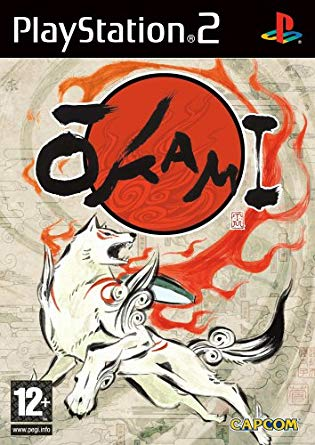 The major innovation of the game is the Celestial Brush. By hitting a button at any time during the game, you can instantly render the current scene (with the action paused) as an ink drawing, and you can draw on it to make things happen. (For example, if you draw a circle in the sky the Sun comes out). As the game progresses you learn more and more brush techniques with a huge variety of effects. The amount of work they’ve put into this aspect of the game is impressive: if you have the brush technique for controlling water, for example, you can use it with any water source you find in the game, whether you’re trying to do something serious or just splash a nearby character with it. As clever as it is, the brush is occasionally too clever – when you have a lot of techniques it can sometimes be difficult to get the effect you desire, and the “make the wind blow” brush stroke is so fuzzily defined it’s difficult to do consistently – and is similar enough to other brushstrokes that you can make the wind blow by accident a lot.

The advancement system is excellent: since you’re a divine being, you’re expected to behave like one, making the flowers grow, feeding the animals, and helping the people you encounter. Whenever you do something nice for someone – even if that someone is just “nature in general” – their gratitude becomes Praise, which you can use to get more ink pots (which you need to use your Celestial Brush technique), health points, or space in your purse for cash. Unlike a lot of computer RPGs these days, the designers didn’t bother to include an “evil option”: the game is essentially linear, although it has a decent number of side quests, and you only get rewarded for being a nice and helpful doggy. You can be as mean as you like to people, setting them on fire and so forth, but you’ll never make enemies of them, and you can still earn just as much Praise when you help them out. This doesn’t actually feel limiting at all, because it’s clear from the start that this is how the game is set up; wanting to take an evil route in Okami would be like wanting to play a version of Tetris where you don’t have to line up the bricks.

There are a few aspects of the game – like Issun, your constantly yattering companion, and the random science fiction elements (or strictly speaking, science fantasy elements – they’ve got an SF aesthetic but they are well and truly rooted in fantasy) that start turning up partway through the game, which at the time look pointless and irritating, but by the end of the game make absolute sense – but of course, just because they make sense and feel good when you finish the game doesn’t mean I wasn’t irritated when they first appeared. Issun, in particular, is singularly useless until you get close to the end: he talks all the time and gives advice when it’s entirely obvious what you need to do, and remains silent when the maddeningly difficult puzzles show up.