As previously documented here, The Black Alchemist was Andrew Collins’ self-published sleeper hit which kicked off a flurry of interest in psychic questing. His followup would actually get issued via Arrow, a mainstream publisher, and would be his magnum opus: whilst he had written accounts of psychic quests before and after, none would be as massive, wide-ranging, or take in such a broad picture of his questing career from its inception in 1979 to the book’s emergence in 1991. That book would be The Seventh Sword, perhaps the deepest dive you could take into psychic questing without getting up and actually dabbling in it yourself.

The book is divided into two parts. The first part constitutes Collins’ definitive account of the finding of the Green Stone and the associated Meonia Sword – as he’d previously recounted in his self-published pamphlet The Sword and the Stone, and as Graham Phillips and Martin Keatman detailed in The Green Stone. Far from redundant, this involves Collins going into the subject in substantially greater depth than any previous recounting of the story, and delving into subjects that Phillips and Keatman had only glancingly addressed. 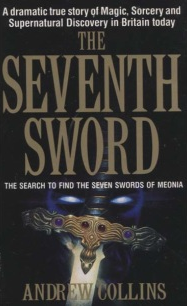 The second part picks up a few years later and takes in a span of some six years; after Collins learns that the Meonia Sword was not a unique artifact, but part of a set of seven, bit by bit the other swords are uncovered. It turns out that the occultists who’d hidden them in past centuries had intended that they be used in a ritual known as the Form of the Lamb, to unfold at a location known as the Heart of the Rose, in order to herald the coming of the Messiah and other such high spiritual and utopian goals. Eventually six swords are discovered, leaving only the titular Seventh Sword – which, due to its association with the powers of darkness, was known as the Black Sword. The book concludes with Collins still searching for it and encouraging readers to help out in the quest.

Over both parts, Collins and his allies must tangle not only with the difficulties of searching out the artifacts but also believe that they are opposed by a grand occult conspiracy – one which the Black Alchemist and his Friends of Hecate were only a local franchise of. With an Illuminati-esque level of power (and the appropriate tangled Masonic heritage), this conspiracy is never too far away. Can Collins and his questers avoid being ground down by… the Wheel???

END_OF_DOCUMENT_TOKEN_TO_BE_REPLACED 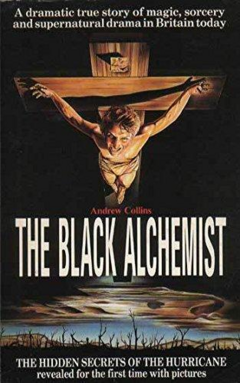 Andrew Collins, a key figure in the development of “psychic questing” and a participant in the events of The Green Stone and The Eye of Fire, didn’t just restrict himself to helping out his buddies Graham and Martin in their quests; a practised ceremonial magician in his own right and benefiting from a wide network of friends and contacts in the community, he was more than able to conduct his own investigations, usually with a suitable psychic colleague guiding him.

One such colleague was “Bernard” – his true identity not disclosed by Collins out of respect to his wishes. In the mid-1980s, Andy and Bernard discovered something disturbing: their questing efforts kept crossing the path of a mysterious figure, an individual that they never met in person but who Bernard was able to sense psychically. Time and time again, they’d arrive at some sacred site or other to discover that the individual they’d dubbed the Black Alchemist had been there first, often leaving behind strange tokens and other remnants of his sinister rituals.

As time went by, it became dreadfully apparent that the Black Alchemist was aware of them – and indeed part of his plans involved harming sacred sites which both Andy and Bernard had adopted a sort of spiritual guardianship of. Eventually, they found that the Black Alchemist had gained a cult of devotees – including his fearsome second-in-command, the Black Sorceress of Arundel – and that their plans involved nothing less than creating a sort of immaterial Antichrist – a superhuman entity existing only in the spiritual realm and unhampered by gross matter, able to act to spread evil on a global scale. And the side effects of this working included such events as the hurricane which unexpectedly wreaked havoc in Britain in 1987…

…or maybe Bernard was making all of this shit up, but Collins never suspects this for a second.