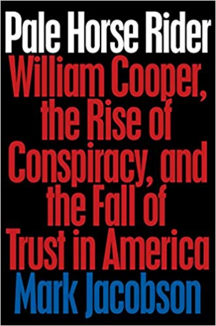 Milton William Cooper basically told the same story ever since he made his first big public splash in 1988. The story went like this: as part of an accomplished military career which saw him serving in Vietnam, Cooper eventually found his way into the Office of Naval Intelligence, in a post under Admiral Clarey. Bored out of his skull and frustrated with the massive discrepancies between the stories he saw Nixon and Kissinger telling the American people on the news and the activities he knew to be going on in Southeast Asia as part of the overspill of Vietnam into Cambodia and Laos, he eventually started peeking at top secret documents which, whilst not strictly intended for his eyes, happened to be in the filing cabinets in his office. These documents revealed a hidden story of astonishing conspiracy against the American Republic and the wholesale subversion of its Constitution.

The problem was that what Cooper claimed was actually in those documents kept changing. When he first started making his claims, they were generally in support of the Majestic-12 conspiracy theory and the documents received by UFO researchers Jamie Shandera, William Moore and Stanton Friedman. Then, when the credibility of those documents started looking shaky, Cooper claimed that the documents he’d seen in the Navy substantiated this – that the leaked documents were part of a damage limitation plan by the real Majestic-12 to send potential investigators down blind alleys should they get too close – but he stuck with his claims of UFO conspiracies and secret pacts with hostile alien races, claiming that he’d seen in the filing cabinets copies of the legendary O.H. Krill papers (named after the alleged alien ambassador to Earth).