Giddy with excitement after reading The Malacia Tapestry, I wanted more Brian Aldiss, so when I saw a second-hand copy of Report On Probability A I snatched it up. Unfortunately, it looks like Brian Aldiss’s output isn’t as consistent as I’d hoped it would be: the Report is an interesting experiment that was probably fun to write but isn’t especially fun to read. 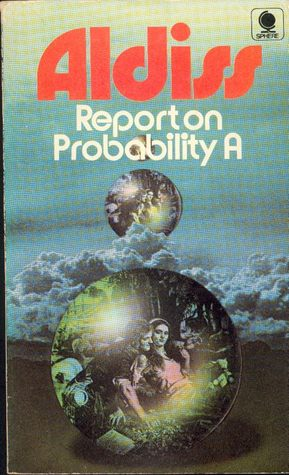 The bulk of the book covers the surveillance of the house of Mr and Mrs Mary by three observers, named only G, S, and C. G used to be Mr Mary’s gardener, S used to be his secretary and C used to be his chauffeur; as the novel progresses we learn that they were all fired for overfamiliarity with Mrs Mary, but none of them could bring themselves to leave: as such, they are all hiding out in the various outbuildings of the Mary estate, and all of them obsessively watch the house, hoping for a glance of Mrs Mary.

END_OF_DOCUMENT_TOKEN_TO_BE_REPLACED

Science fantasy in an urban setting seems to be something which becomes fashionable every twenty-five to thirty years or so. Those who are blown away by the apparent originality of China Mieville’s New Crobuzon or Jeff VanderMeer’s Ambergris stories may be surprised to see very similar themes expressed in the 1970s, both in M. John Harrison’s tales of Viriconium and in Brian Aldiss’s creation of Malacia, setting of The Malacia Tapestry.

Malacia is a city-state of Renaissance Italy which is two million years old (at least) and exists thousands of years in our future. Its citizens trace their roots to civilisations immeasurably older. The people inhabiting it, despite resembling human beings in every way, are descended from dinosaurs, although rumours persist that some people out there are descended from apes. Winged people and satyrs walk the streets. The Higher Religion of the priests and monks cloistered away in the cathedrals is closely intertwined with the Natural Religion of the magicians who dispense curses and prophecies from their burning altars in the streets. The city is defended from regular sieges by the Ottoman Turks by hydrogen balloons, cannons, and dinosaurs. This bizarre situation persists because of the Original Curse, that the city may never change, which is upheld and defended by the Supreme Council. Despite little changes slipping in here and there – such as hot air balloons and phonographs – it’s difficult to bring about social change. The recent discovery of photography might just change that.