Just as Dungeons & Dragons was the driving force behind the original tabletop RPG fad, Vampire: the Masquerade was the trendsetter within the hobby for the 1990s. From the release of Vampire in 1991 until 3rd Edition Dungeons & Dragons came out in 2000, more or less every significant RPG release was in some respect informed by Vampire – either as an attempt to ride its bandwagon, or as a reaction to (or against) the style of gaming it presented. It shared with Dungeons & Dragons the distinction of being one of those RPGs which became really central to the hobby; you could love it, you could hate it, but everyone with more than a casual involvement in the RPG scene had an opinion of it. 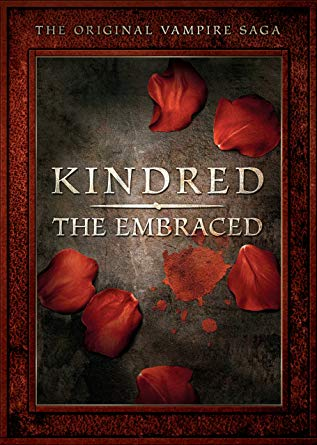 It is the nature of such things that they will generate tie-ins. You had Vampire novels (at least one of which formed the basis of a lawsuit against the makers of Underworld), you had a collectable card game, you had videogames and in 1996 you had an honest to goodness TV series based on the game, with Vampire creator Mark Rein·Hagen co-producing with John Leekley. (In fact, it would be amongst Rein·Hagen’s last significant contributions to Vampire, since soon after the show happened he left White Wolf due to a falling-out between him and his business partners, the Wieck brothers.) Coyly, it describes itself as being “based on the book” rather than “based on the roleplaying game”, presumably because if you say your show is an adaptation of a book people assume “novel” instead of “RPG rulebook” and that gets you more culture points.