Italian B-movies aren’t exactly averse to sensationalism or extreme content, and in his prime Ruggero Deodato wasn’t averse to cranking both dials up to 11. Most known for infamous video nasties with a shockingly nihilistic ethical worldview such as Cannibal Holocaust and The House On the Edge of the Park, Deodato also turned out this entry in the poliziotteschi subgenre – a particular style of Italian crime film from the 1970s which emphasised extreme violence and a murky worldview in which the line between cop and criminal was thin at best. 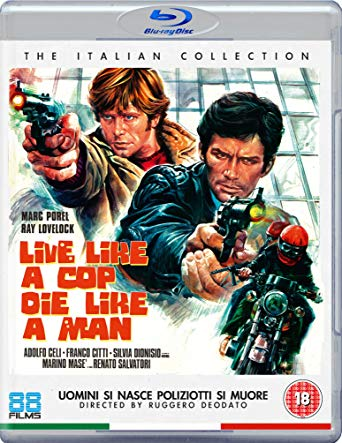 Perhaps the closest equivalent in American cinema would be Dirty Harry, since like that movie the poliziotteschi genre often entails applying the amoral worldview and extreme violence of Sergio Leone-esque Spaghetti Westerns to a modern-day cop story. Even by such standards, Live Like a Cop, Die Like a Man is an ugly and bleak piece. Fred (Marc Porel) and Tony (Ray Lovelock) are police officers in a special undercover squad, which uses highly advanced computer intelligence correlation systems to predict the actions of organised crime and help the cops get to where they need to be before crime happens. They’re also vicious thugs with little compunction about, for instance, straight-up murdering pursued criminals if they reckon they can get away with it, and wildly irresponsible to boot. (There’s a great scene at one point where they practice their sharpshooting skills by running around shooting over each others heads at tin cans, in a sort of William Tell-themed obstacle course.)

The major target of their squad is the organised crime gang headed by Roberto “Bibi” Pasquini (Renato Salvatori), and their heavy-handed tactics only get more brutal when Bibi’s goons assassinate one of their colleagues on the squad. Torturing goons, burning the parked cars of rich clients of one of Bibi’s elite casinos (along with two car park attendants/guards), it’s all fair game as far as they our cop “heroes” are concerned. Maybe Fred and Tony do get results – but there’s a mole in the police department who’s willing to leak their identity to Bibi. Once Bibi finds out who they are, can the duo survive his revenge?

Deodato rarely misses an opportunity to get sleazy and exploitative – there’s a bit where the two cops confront Lina Pasquini (Sofia Dionisio), Bibi’s sexy young sister, and she more or less literally drags them into bed with her – and he’s also got a real way with violence, opening the film with a really over-the-top motorcycle chase that might just qualify as the movie’s best action sequence altogether. However, it’s also kind of a chore to sit through – you cut from heartless, self-centred, amoral policemen to heartless, self-centred, amoral gangsters, and sooner or later you find that there’s nobody to really root for in the movie.

This would be fair enough if it were something like The Shield, where underpinning the tough cop talk and ruthless action there’s a more nuanced and serious examination of corruption in police work and violence begetting violence and so on. However, Live Like a Cop, Die Like a Man doesn’t carry itself like that – instead, it gives every impression of wanting to be a light-hearted Lethal Weapon type affair – if Lethal Weapon had implied at one point that Danny Glover and Mel Gibson raped the big bad’s girlfriend, directly showed them murdering and torturing people, and then showed their boss coming out of nowhere at the very end to kill off the bad guy whilst the aforementioned implied rape is happening offscreen. Like Dirty Harry and its imitators, the polizioschetti films are often accused of being fascistic celebrations of vigilante violence on the part of the police; Live Like a Cop, Die Like a Man is one of those movies where such accusations hit the nail on the head.

Also, when Bibi’s boat gets blown up at the very end, it’s very obviously just a tiny model boat floating in a puddle.