Under normal circumstances, I’d read the first few trade paperbacks of a comic series and do a Reading Canary review of them, and that’s how I intend to proceed with the rest of The Walking Dead, but the exceptional quality of Days Gone Bye, the first trade paperback compilation in the series, combined the fact that at least one of the major plot arcs is resolved by the end (rendering the book at least partially self-contained) compels me to render an early judgement. This is both one of the most exciting comics I have read in the past five years and the most mature and intelligent treatment of the zombie apocalypse concept I have ever seen, making Night of the Living Dead look like Zombie Strippers. Zombies have been back in fashion for the last few years – at least since 28 Days Later – but the writing of Robert Kirkman combined with the understated, never-too-gory black and white artwork of Tony Moore, has lent a new freshness and vitality to a concept that these days is running the risk of becoming played-out. 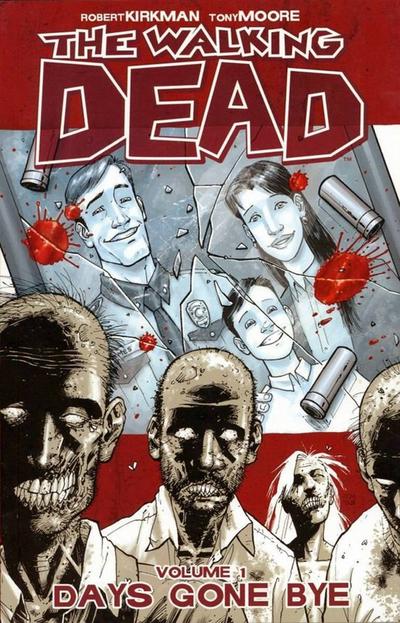 Kirkman’s introduction to this volume provides a succinct and coherent explanation of his intent: essentially, he’s not out to write a horror story (although a zombie apocalypse comic is invariably going to have a scare or to) so much as he’s intent on producing the first zombie soap opera. The concept of the series is simple: Kirkman and the reader are going to follow the trials and tribulations of Kentucky cop Rick Grimes and his fellow survivors of the end of the world they have known, with their personal interactions and their character development receiving more attention than zombie-shooting action, and the series will continue until Rick eventually falls.

The book’s tagline is “In a world ruled by the dead, we are forced to finally start living”, and consequently Kirkman is less interested in depicting society succumbing to the zombie plague and more interested in showing us what the survivors do once society has crumbled. He therefore borrows a trick from 28 Days Later; at the beginning of the story Grimes is shot, and ends up in a coma, and then wakes up some weeks later in a hospital, society having collapsed whilst he was dozing. The similarities end there, though; these zombies are the classic slow, shambling George Romero variety, and it turns out not everyone from Rick’s past died in the plague. The story really kicks into high gear when Rick hooks up with an encampment of other survivors outside of Atlanta, a bunch of characters just as interesting as Rick himself, at which point the soap opera element really kicks in. Plotlines in this volume include the inconvenience caused by Rick turning out to be alive, a daring raid into Atlanta to salvage some decent guns, and the mixed blessing that results from giving a seven-year-old child a pistol to defend himself with.

Kirkman’s last major comics offering was Battle Pope, and although The Walking Dead is a lot more serious it also possesses a certain sense of humour that prevents things from becoming unbearably bleak, and an emotional depth which outclasses the best Romero offering. Days Gone Bye is the best introduction to a graphic novel series I’ve ever seen, is sold at a pretty reasonable price (£7.50), and is available through Image Comics; most major book shops will be able to order it if you don’t like going to places with bad lighting and musty smells to get your reading material.