Hammer Studios would crank out some four movies in their Mummy franchise, with their first entry in the series mashing together various ideas from Universal’s The Mummy sequels – a move enabled by the fact that Universal was acting as distributor for them. After that distribution deal faded, Hammer needed to look further afield for ideas, but it’s still surprising it took them until the fourth film in their series (released in 1971) to draw on Bram Stoker’s The Jewel of Seven Stars, an Egyptian-themed horror piece which was one of the first tales to weave Egyptian mummies into the gothic horror pantheon and may well have been an inspirational source for Universal’s original The Mummy. 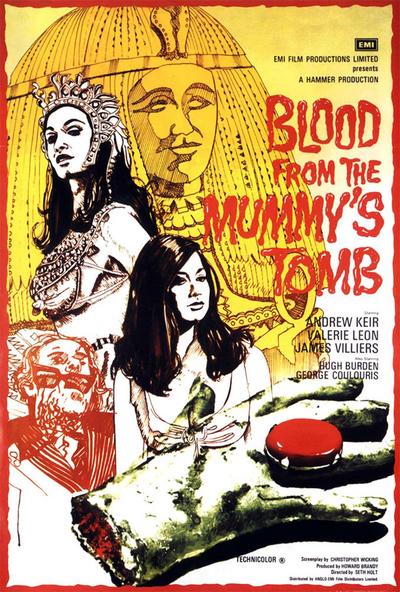 Blood From the Mummy’s Tomb opens at a breakneck pace which it maintains throughout the whole of its first act. We begin by seeing Margaret Fuchs (Valerie Leon) lost in a dream of a past life. In ancient Egypt, the enigmatic witch-queen Tera (also Leon) is laid to rest in her tomb in a decidedly unorthodox ritual. It’s clear that the priests have no great love for her, since they hack off one of her hands and cast it out to be eaten by the wild dogs of the desert. Their dislike seems well-founded; for after the ritual is complete and the tomb is sealed, the priests are caught up in a desert storm as they leave the tomb, and some invisible thing in the wind cuts each of their throats. The dogs refuse to eat Tera’s hand and it crawls away, still alive, still wearing a ring with a great red stone…

Margaret wakes up to her present-day life, and it soon becomes apparent to the viewer that she is right in the middle of a vast web of occult incidents. Her father, Julian Fuchs (Andrew Kier), is an Egyptologist who led a mysterious expedition many years ago, the results of which none of the participants has ever discussed; he gives her an early birthday present, the very ring we saw Tera’s hand wearing in Margaret’s dream, which we now see has seven flecks inside arranged exactly like the stars of the Plough.

END_OF_DOCUMENT_TOKEN_TO_BE_REPLACED

Ever since enterprising movie producers realised that setting a movie in the prehistoric past was a good excuse to get nubile young actresses (and perhaps a buff actor or two) in skimpy fur costumes, absurdly unrealistic fantasies of cave people doing all sorts of archaeologically unlikely stuff like fighting dinosaurs have been an occasional fad in cinema. A swathe came out in the 1960s, and one of the contributors to this outburst was Hammer Studios, who produced a few movies along this line – some of which have been used to round out the numbers in Hammer DVD boxed sets or the like.

For this article I’m going to review a couple of them. Spoiler: they’re both kind of goofy. One of them, at least, is notable for being a major landmark in the career of Raquel Welch. The other one… has a model rhino.

One Million Years BC 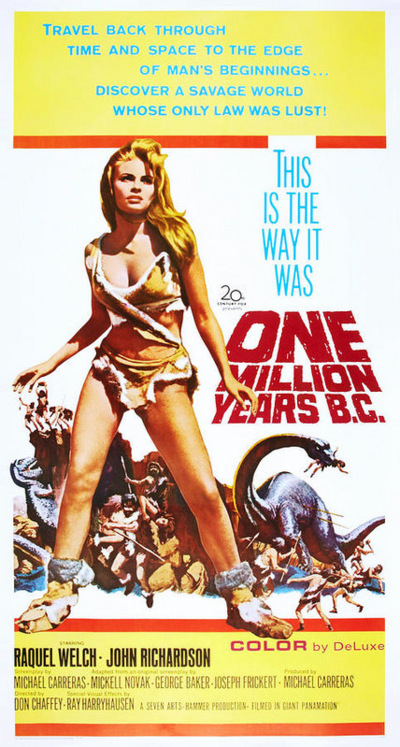 This Hammer co-production with Seven Arts, directed by Don Chaffey, is the one everyone remembers for Raquel Welch in a doeskin bikini and the awesome stop-motion dinosaur action courtesy of Ray Harryhausen, and between their various talents they probably made this the most famous Hammer production which wasn’t a horror piece. Goodness knows that there isn’t much else of note about this.