Toyne Newton’s 1987 The Demonic Connection isn’t quite a psychic questing book along the lines of those written by Graham Phillips and Martin Keatman or Andrew Collins, but it’s regularly cited in Collins’ early work and has much the same atmosphere about it, largely because both The Demonic Collection and the various questing books have similar preoccupations with occult conspiracies at work in the English countryside. 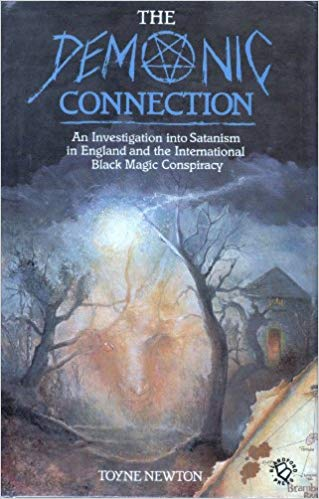 The major difference in approach is that whilst the likes of Phillips or Collins’ questing books go into detail about the little adventures the authors and their colleagues have as they go using the powers of the mind to uncover various mysteries, Newton is much less interested in reporting methodology; with some exceptions, he just dumps the results of his research on the reader, which means it’s unclear to what extent psychic or other unconventional research methods figured into his work.

However, what The Demonic Connection lacks in adventure, it more than makes up for in the sheer scope of its theories. Another commonality it has with the psychic questing books is this tendency to take some local landmark in the English countryside, investigate its alleged mysteries, and thereby spin a yarn which puts that otherwise nondescript locale at the heart of a cosmic conflict.