Coming out in 1999, The Thirteenth Floor was overlooked or outright rejected by critics on its release, probably because it shared the whole total immersion virtual reality schtick with The Matrix – indeed, I suspect the two films represent one of those Armageddon/Deep Impact situations where multiple studios produce movies with a similar general concept because one of them got word of what the other was doing and thought it sounded promising enough to steal. 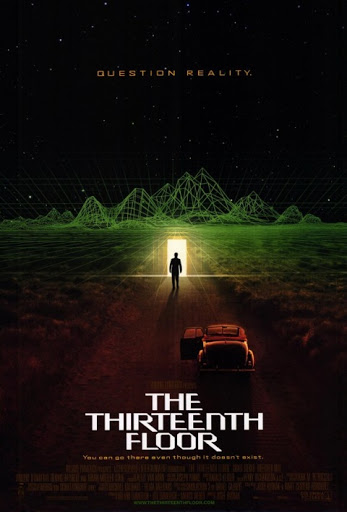 Whereas The Matrix had wire-fu, an action movie plot, long waffly philosophical speeches, an aesthetic which combined Gigeresque postapocalyptic wastelands with a latex budget larger than Keanu Reeves’ paycheque and a breakneck pace, The Thirteenth Floor had a slow-paced detective mystery with one foot in present-day LA and the other in a perfect simulation of LA in 1937, housed on the thirteenth floor of a downtown apartment building. (I am immediately reminded of Philip K. Dick’s Now Wait For Last Year, which includes a faked-up version of Washington DC circa 1935 built on Mars for a powerful man’s personal amusement.)