Cerebus the Aardvark, or simply Cerebus for short, is without a doubt one of the most ambitious and important works in the field of comics – especially independent comics. It began as a simple, funny parody of sword & sorcery comics, made funny in part by casting as its central hero a diminutive, grumpy aardvark (“the Earth-Pig born!”, as the narration in early issues was fond of proclaiming). 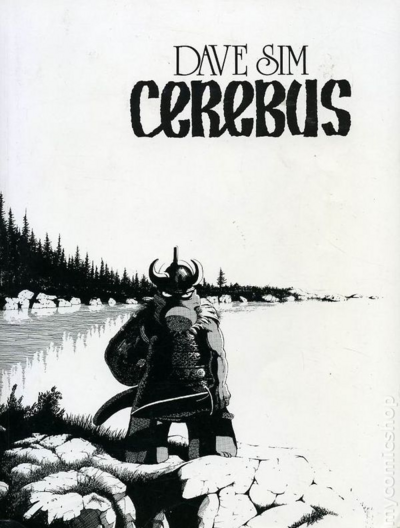 With the passage of time, it increasingly took on more serious themes, with artist-author Dave Sim shifting gear from telling short stories over the course of a single issue to telling two-to-three-part stories to, eventually, producing enormous novel-length series of dozens of issues. Sim declared his intention that the series would run for 300 issues, culminating with Cerebus’ death. Following on from its debut in 1977, the series ultimately put out its 300th issue and bowed out with issue 300 in early 2004, at the end of which Cerebus did indeed die.

In the intervening 27 years, the series managed to spearhead a major shift in comics publishing; not only was this the first time anyone had attempted a work of this scope within indie comics (or, for that matter, within comics in general), but Sim kicked all this off in a time when reprints of individual comic book issues or collecting comics into trade paperbacks was not the industry norm; the rise of the trade paperback can, in fact, be linked in part to the early commercial success of the so-called “Cerebus phonebooks”, compilations of the aforementioned novel-length storylines which ended up being literally phonebook-thick.